Since the formation of the Node.js Foundation, the Node.js project has aimed at moving forward while at the same time providing a stable platform for those that are building businesses and need a reliable foundation.

The key way that this has manifested itself is through the Node.js release process, including the Current release line and the LTS release lines.

I've consistently heard from individuals that this can get a bit confusing, and that there's not enough guidance online to be able to fully understand context around the Node.js release lines and why, when, and how they should be used.

There is some key terminology that can get confusing when discussing Node.js releases. Let's dig into some of these terms to get you the context you need:

That's a lot of context around terminology, especially for release lines. It can all seem very confusing if you're trying to understand purely from reading it. Fear not, though! To help you understand this a bit better, let's look at how this process works for a single release line, and is then applied to multiple release lines over time.

The Node.js project ships the release lines like this as a way to introduce SemVer Major changes on a consistent, predictable, and regular basis. This helps the project both get end-users feedback around the impact on various aspects of the project and notice if any issues arise within the broader ecosystem itself so they can be addressed before those changes go into an LTS release line.

How the Node.js Release Lifecycle is Applied to an LTS Release Line

For any given LTS release line, you can expect a relatively consistent release lifecycle. This includes progressing through the Current, Active LTS, Maintenance LTS, and EOL stages.

This process occurs over three years:

While this is the stated process of the project, it's worth noting that the collaborators can indeed vary these dates if required. This would and should happen only to ensure stability and reliability of Node.js and its dependencies. One example of this is the Node.js 8 LTS which will have a three-month early end date because of OpenSSL's LTS cycle for 1.0.x.

How the Node.js Release Lifecycle is Applied Over Time

As the release lifecycle is applied to more and more release lines over time, the project begins to have layered support for multiple LTS versions. This is evident when you look at a timeline that displays multiple LTS releases at different stages of their lifecycle: 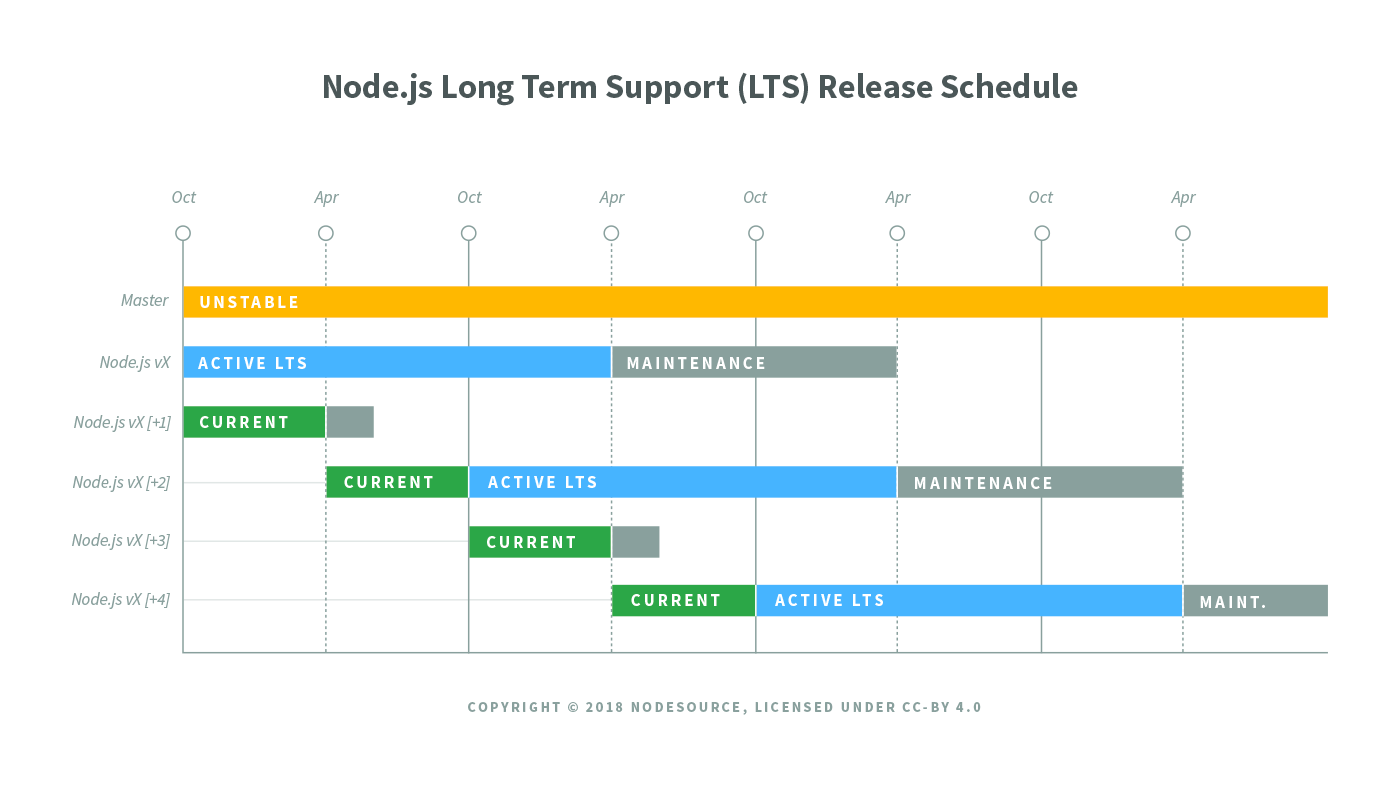 This layering of different stages of the LTS cycle enables users of Node.js of all kinds to tweak their internal upgrade process to something that suits their specific use cases. For indie developers, open-source projects, and startups, immediate upgrades can happen every six months. For devices that can't often upgrade (like IoT devices) and enterprise users with a slow upgrade cycle, the versions will live on long enough to be reliable and supported while also providing a clean upgrade path.

Which Versions of Node.js Should You Actually Use?

The honest answer: It depends.

If you're shipping an application or API to production, you should probably err on the side of caution and aim for the latest LTS. If you're developing a side project, you can go ahead and use the Current release line. If you're building tooling that's meant to be super helpful to a bunch of developers, you should probably try to support a range of versions.

There are options, and that's by design. Node.js succeeded because of its ease of use for such a wide range of developers. One of the most important things that happened when io.js and Node.js re-joined was the creation of the LTS process, which helps ensure that Node.js is a stable and reliable platform for a particular set of use cases.

That said, as individual developers the ease of use that Node.js initially provided still exists and will always be maintained going forward. As such, there's no one true and righteous path to follow with which version of Node.js to use. Instead, every organization, every team, and every individual needs to weigh the benefits and drawbacks of different approaches on a case by case basis to best suit the interests of people and projects working with Node.js effectively.

If you're interested in the Node.js community and learning how Node.js works, you should definitely check out some of our recent posts–you may be interested in checking out How You Can Start Contributing to Node.js Today and Node.js 10: The First Week
.

Beyond that, if you want to keep up to date on the Node.js community and what's happening across the ecosystem, you should be sure to check out @NodeSource on Twitter. We try to spread the word as far and wide as possible about the awesome things that are always happening in the community.