How To Avoid SSR Load Issues in Node.js - NodeSource

How To Avoid SSR Load Issues in Node.js

In my experience consulting the past few years, one thing has become clear: everyone struggles with scaling their SSR apps, no matter the chosen framework. SSR is expensive — running a lot of code intended for the browser, on the server, to pre-generate markup. Lately, web frameworks have been making strides in improving things, Solid.js being a great example of fast, performant SSR. But still, SSR can be expensive enough that if you can't get it to run fast enough, you might be better off resorting to client-side rendering.

If your SSR takes longer than 200ms (I'm generous), it's better to render on the client.

And that's the main consideration you should have: if you can avoid SSR, avoid it.

There are two ways you can avoid SSR:

SSR is the slowest way to do templating — that's what it is, essentially, templating HTML pages that will load and boot up on the client, where rendering will take over. It's just incredibly convenient to reuse all the client code that does the rendering on the server as well. In this article, I'll talk about a few things that can be done to easily to improve the performance of run-of-the-mill SSR applications, not limited to Next.js, but rather any framework.

I chose with-redis from Next.js' excellent set of examples. This is a simple voting app, where users get to add feature requests that other users can upvote. There's only one page powered by a few API endpoints.

The project structure is as follows:

Both the API (server-only) routes and the SSR-enabled React index route module reuse the same Redis instance provided by lib/redis.ts.

It is a simple yet sufficiently complex application to work with and explore some interesting considerations. If you want to follow through this article playing with the code, first checkout the repository:

Before we get started, let's see how this app is doing now. I ran the app using N|Solid so I could easily have access to a bunch of different metrics and also so that I could easily generate CPU profiles and heap snapshots.

To connect N|Solid to the server collecting metrics, I added my N|Solid SaaS token to package.json:

Then, I built a production bundle and autocannoned it:

1109 ms for P99 latency is not great, also not terrible. But pretty bad. At this stage, this application is better off delegating rendering to the browser for scaling.

SSR performance issues typically fall into two categories: data fetching and rendering. Either the data fetching takes too long, or the route component is too complex, rendering it takes a lot of CPU, which blocks the Node.js event loop while running. To illustrate how a typically troubled SSR application can behave, let's create a problem where the process starts using more memory than it needs to. Sometimes this can lead to a serious memory leak that ultimately renders your process unresponsive.

Then, everywhere redis is used, let's change it to a function call. This will cause a new Redis client instance to be created every time the function is called, thus increasing memory usage by creating too many file descriptors.

The condition will also introduce a random slowdown to every request. This mimics very closely what the situation can be for many SSR applications in production that have no control over the latency, availability, and performance of the external services they rely on.

Watching it blow up

That's pretty bad now — and not only that, we now cause the Redis server to become unresponsive for having way too many connections: 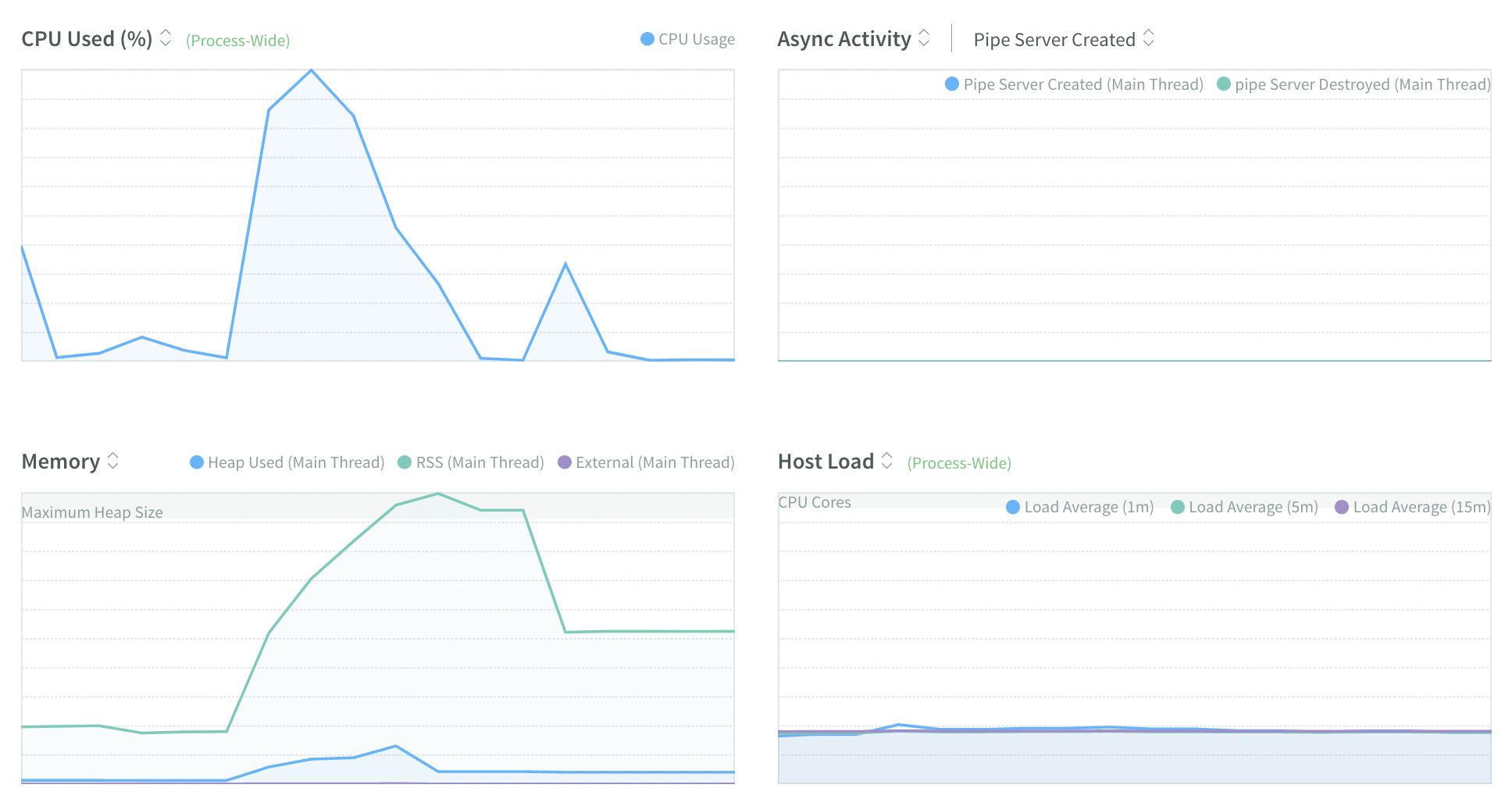 One of the first things I do when debugging SSR applications built in a specialized framework is to see if they have a Fastify plugin. Running SSR from a Fastify server you control gives you access to hooks, and allows you to implement your API routes leveraging all of Fastify's features and performance benefits.

Adding cache to SSR is the first thing to consider, if going static is not an option. The logic is simple: if you're serving a large public page that gets updated every hour, and your users get a freshly rendered version every second, you're wasting server resources. Well, now that we have a Fastify server, adding a cache layer to our SSR should be easy, right?

Wrong. Since @fastify/nextjs is passing down req.raw and reply.raw to Next.js methods, which are designed to work directly with ServerResponse, they bypass Fastify's send() pipeline. There's a workaround, which is a bit costly in terms of performance, but since we're using it to prevent something even more expensive from running all the time (SSR), it's worth it.

Next step is to use Redis itself for the SSR cache. For this, I'm just going to use @fastify/redis to connect to Redis, and make some tweaks to the code above:

Now we're preventing SSR from taking place on the index route at a frequency higher than 1 minute. All requests within this time window will receive markup stored in the cache, not freshly rendered through SSR.

Another step we can take is to disable SSR selectively, for instance, unless you're serving content to search engine. Or if you detect the server is under high load, rendering should be temporarily delegated to the client. Let's see how easy it is to disable SSR and rely on CSR for a Next.js application.

First, we need to detect we're not serving a search engine or any other kind of bot agent. For that, I could find the handy isbot library from npm.

Now unless the client is a bot, we're setting a flag on the ServerResponse object, which can be accessed from Next.js in getServerSideProps(), to let it know CSR is to take place. But Next.js doesn't take care of that by itself — we have to use the wrapper page component to selectively disable SSR for the route component.

There's still a bit of SSR taking place, that is, some React code still needs to be executed on the server, but the above effectively prevents the route component from being rendered, which should make the server deliver the final HTML much faster for client-side rendering.

Note that it also required the route component to be wrapped in an element with the suppressHydrationWarning attribute.

Now that we're doing SSR caching and skipping SSR altogether except for search engines, performance should be much faster now, right?

As it turns out, the previous iteration completely turned off SSR caching with the return highlighted above. Removing it fixes the issues as SSR caching is enabled again, but it served to remind me that the app needed one final fix: removing the chaos I introduced when I changed lib/redis.ts.

With that in place, things are much better now: 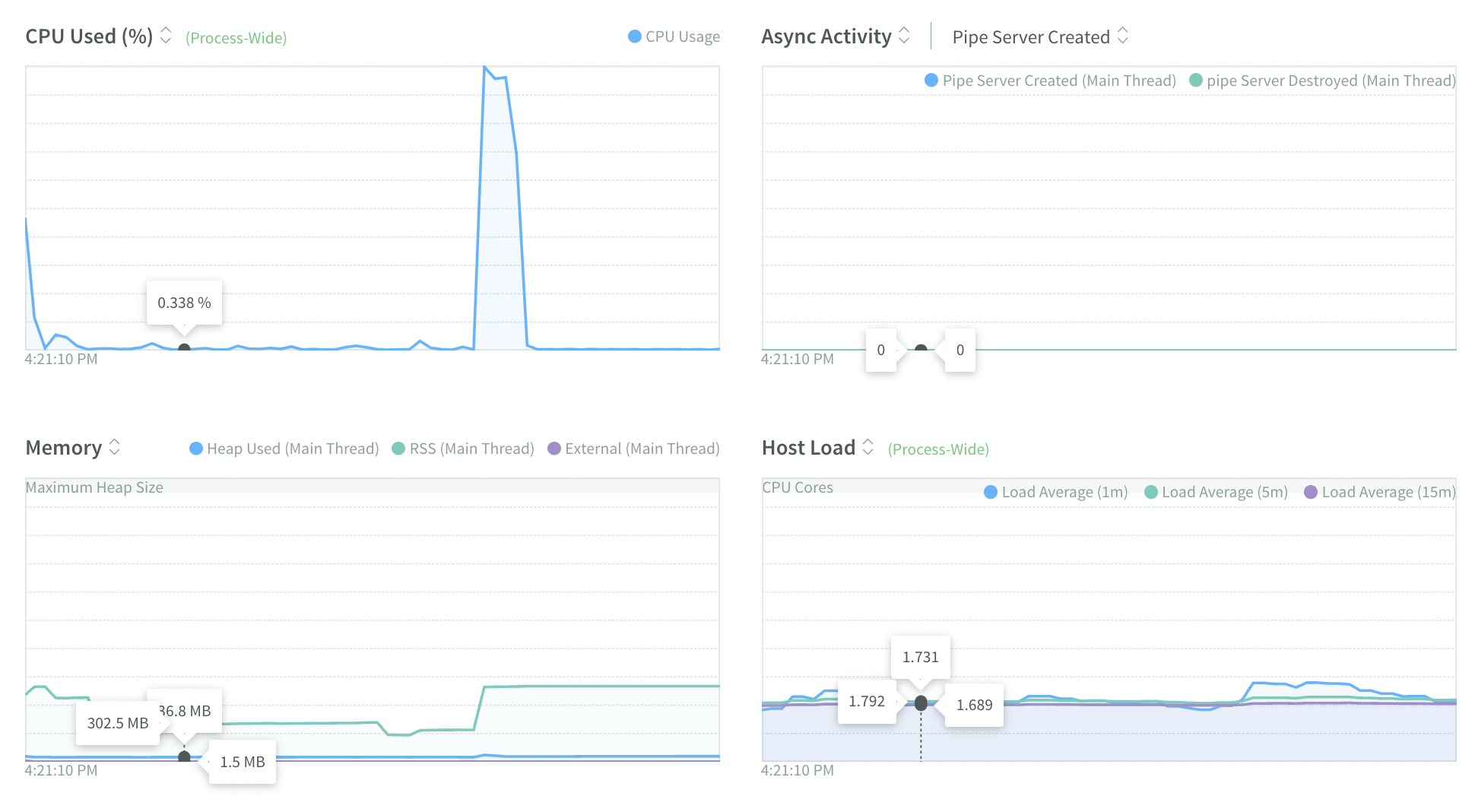 A CPU spike is still visible because — well, this was 500 concurrent requests over 10 seconds on my humble laptop, but 153 ms for P99 latency is excellent. Also notice memory usage stays well-behaved in a flatline.

Now, if this were an application serving millions of requests per day and hundreds of users simultaneously, I'd look into other ways of reducing the cost of running it. Perhaps the most radical solution would be to drop React itself, given there are alternatives with better SSR performance, but if that's not an option:

Beyond that, I can't really think of any other improvements outside the realm of dropping Next.js itself or going extremely low-tech. In my next article I'll rewrite this application with Fastify DX and Solid.js.