Distributed Tracing Support in N|Solid [10/10] The best APM for Node, layer by layer.

The Complexity of Distributed Architectures.

Complex modern systems are the new reality for infrastructure teams, and this is due to the evolution of Cloud Computing and working with Distributed systems, containerization, and microservices by default. The teams now have different infrastructures and virtual services with which they must take care of scalable, reliable, and performative applications.

Today, a single request from a user can go through thousands of microservices, making it challenging to quickly identify the point where things started to go wrong. For this reason, it is necessary to have an observability platform, which allows us to have a centralized view to inspect how requests are performing across services.

Before jumping into our definition of Distributed Tracing,
let's define a core concept. What is a "Distributed system"?

We're going to use the "Splunk" definition:

"A distributed system is a computing environment in which various components are spread across multiple computers (or other computing devices) on a network. These devices split up the work, coordinating their efforts to complete the job more efficiently than if a single device had been responsible for the task." Splunk

So in this same line, we can say that Distributed tracing is: A method for tracking requests to get the whole panorama of your application deployed on distributed systems.

Distributed Tracing is crucial to better understand the factors that affect an application's latency.

“Since modern applications are developed using different programming languages and frameworks, they must support a wide range of mobile and web clients, so to be effective at measuring latency, we need to follow concurrent and asynchronous calls from the end-user web and mobile clients all the way down to servers and back, through microservices and serverless functions.” Lightstep

Distributed tracing is a core component of Observability mainly used by site reliability engineers (SREs) but also by developers and is recommended in that way to obtain the greatest benefits as a team in charge of modern distributed software.

As your system scales, you'll need to add tracing and refine sampling capabilities, which means getting the context to understand the complexity of distributed architectures.

Being 'debugging' is the most difficult to achieve according to complexity. Sometimes a quick diagnosis is only possible by visualizing trace data.

In this scenario, traditional tools become obsolete because the metrics collected from a single instance will not give us insights into how a user request performed as it touches multiple components. Still, we can have powerful insights if we manage it with distributed tracing.

To understand how the different components interact to complete the user request. You first need to identify the data points that Distributed Tracing captures about a user request. These would be:

But before we go any further, let's talk about key concepts in Distributed Tracing:

NOTE: We have tags associated with each process, and each process has a unique id in N|Solid. The processes messages with the spans that arrive at the console came with this unique ID, so when the ID is passed, we know the origination process (datacenter, network, availability zone, host or instance, container).

In N|Solid 4.8.0, we announce the support of Distributed Tracing for multiple applications sharing requests and/or microservices architectures in our product.

In N|Solid Console now, you can find a new section to gather information throughout the lifecycle of an HTTP/DNS/Other request traversing multiple Node.js applications, providing a comprehensive overview of the communication between multiple services.

Before we go deeper through the console, we should talk about N|Solid runtime, which had built-in support for something called "HTTP Tracing" for a while now; it follows the "Open Telemetry Protocol"(OTEL). More specifically, N|Solid runtime relies on the OTEL Traces concept to monitor the HTTP operations handled/dispatched inside a Node.js application.

Let's use OTEL's Tracing definition to make this straightforward:

It uses the next JSON schema: 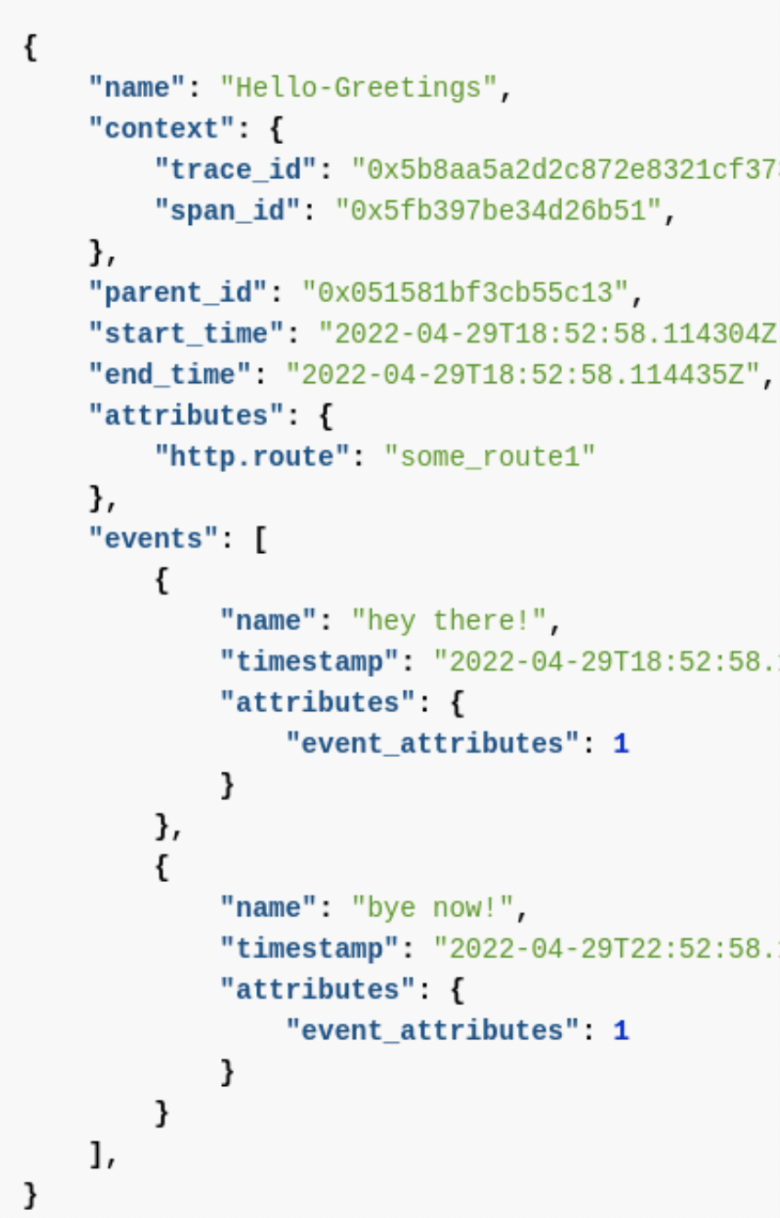 A use case of this functionality occurred when one of the largest airlines in the USA (‘The client’) used one of the renowned APMs, one of the tops from Gartner's magic quadrant, and they evidenced through NSolid that when using HTTP Tracing, The other APM performance hit on was overkill on their application. Still, they became excited about having both cuz' It was no extra money, and they could still jump from one to one for visualizations. — NodeSource Services

Now we know what a trace is and how N|Solid runtime uses them for the console or another back-end (like another APM), it's time to jump into distributed tracing in N|Solid console.

Distributed tracing in the N|Solid console by @juanarbol

Distributed tracing in the N|Solid console is an extension of HTTP tracing in N|Solid, but now; you could make that cover your distributed system, too <3

Now it's time to cover how things work on the console side; before that, let's assume the following sentences as true:

How to see the distributed tracing view in the console:

The view will be something like the "HTTP tracing" view. 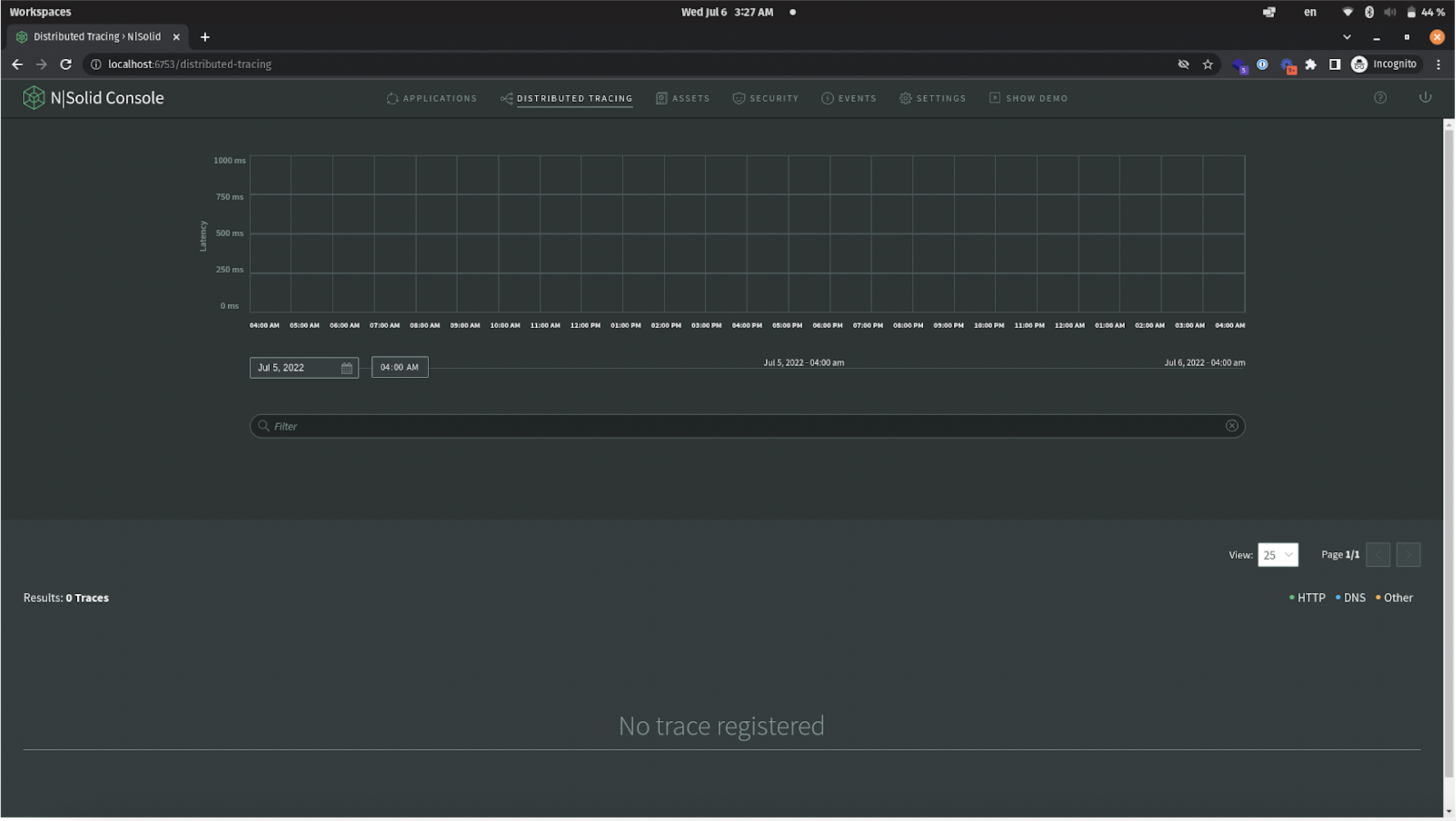 Now is time to monitor traces; I will make a simple request to the "console" service: 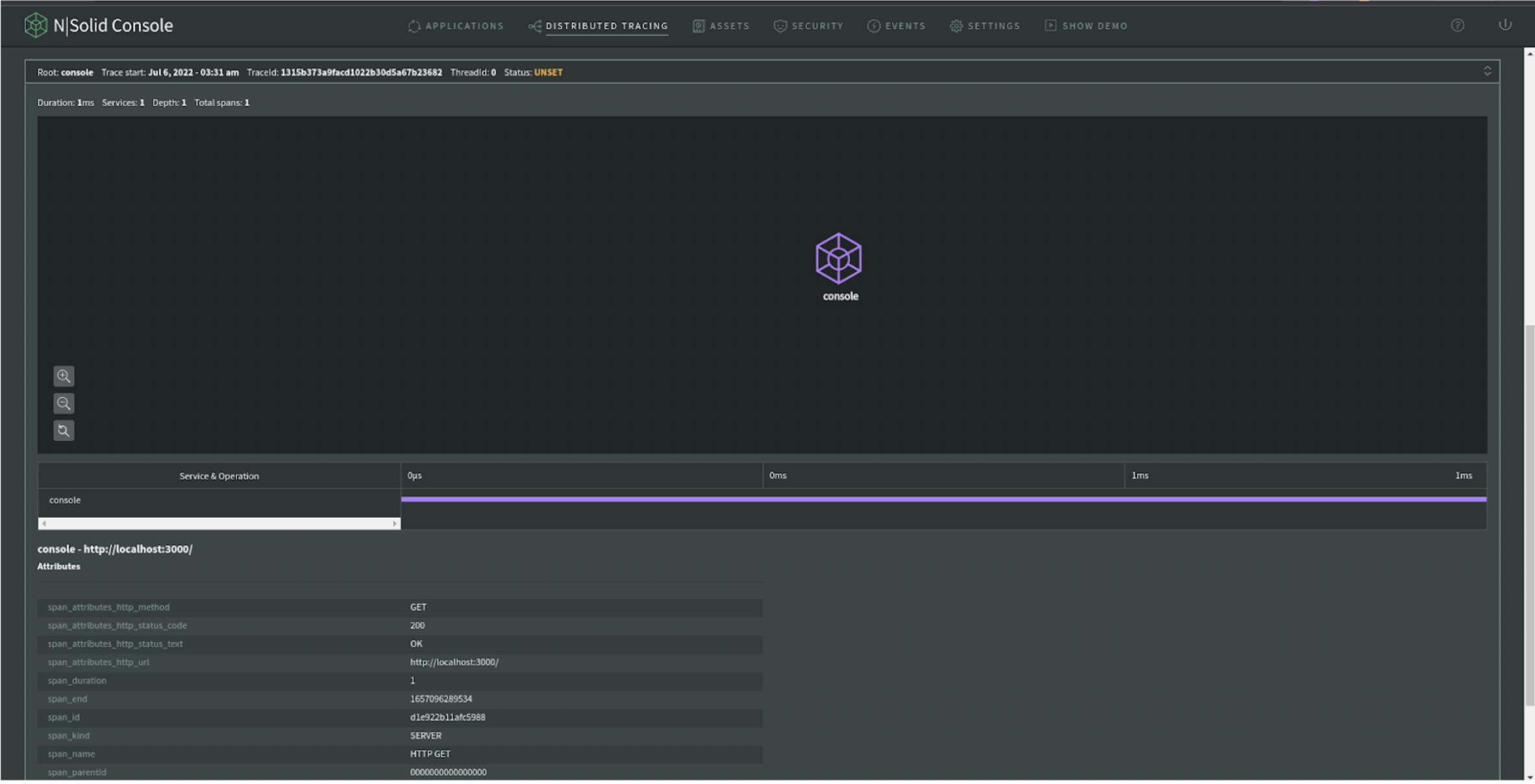 There we go; we get the whole "span" information.

Now is time to authenticate using the console service, which is going to perform a request to the "google-auth-service" to, you know, log in with google, basically.

Now the graph is showing me a "path" from the console service to the google auth service, N|Solid is monitoring HTTP traces in a distributed system; well, it is time to use 2FA, so… we expect to have an extra span from "google-auth-service" to "Twilio" service.

There we go. The graph shows the whole "path," starting from the console and finishing with Twilio. This is how distributed tracing works using N|Solid managed systems.

The collected information can be used for debugging latency issues, service monitoring, and more. This is a valuable addition to users for those interested in debugging a request latency. Tracing traces of user requests through multiple Node applications and collecting data can help find the cause of latency issues, errors, and other problems in your distributed system.

NOTE: This is all the code used to simulate these whole systems.

Distributed Tracing allows us to explore and generate valuable insights about these traces to put them in the right context for the issues being investigated.

To achieve this level of depth in the engineering department, it is important to keep in mind:

From a business standpoint, companies using microservices can find these benefits by implementing Distributed Tracing on their teams:

Finally, it leads to a proactive attitude in the implementation of best practices in their production environments, putting themselves in a position where they can establish growth goals according to performance.

N|Solid is a comprehensive tool that can help your team solve bottlenecks quickly and confidently in production. Our latest release includes Distributed Tracing and Opentelemetry Support in N|Solid.

Summarizing tracing in a comprehensive way.

However, we also support manual instrumentation using our implementation of the OpenTelemetry JS API.

N|Solid is a powerful APM that can help you with its features to proactively solve problems in your Node.js base applications in a safe, reliable, and performative way.

Get to know our major features and get the most out of N|Solid now!

To check out the top 10 features and more in N|Solid, sign up to create your account or sign in at the top right corner of our main page. More information is available here.

As always, we're happy to hear your thoughts – feel free to get in touch with our team or reach out to us on Twitter at @nodesource.