NodeSource Node.js binary downloads keep increasing monthly, providing millions of users worldwide with the power of Node.js. This blog post gives us important insights into using Node.js across Linux environments and the Node.js community in general.

Nodesource has been packaging and distributing Node.js for Linux environments for 9 years. Every major and minor release, as well as security updates. We’ve seen a massive increase in downloads every year. While we don’t distribute every version of Node.js, most of the downloads in Linux environments are provided by us.

Note: If you want to compare, you can read Node by Numbers 2020 here.

In this article, you can find interesting data about the consumption of Node.js worldwide. the trends, spikes, and odds of the usage of the popular runtime that powers millions of applications.

These are the points to be discussed in this article:

First, let's start with the basics:

What is a binary distribution?

A binary distribution is a software package containing executables, binaries, or programs ready to be executed. In this case, it will be Node and NPM compiled executables.

In what consists of the 'Nodesource Node.js Binary Distributions'

why is this important?

Well, NodeSource Node.js binary distributions was downloaded over 90 million times worldwide last year. There are 90 million times people have been able to use, learn, and interact with Node.js thanks to this project.

Last month, it was downloaded +11 million times, and millions of applications and web pages are using it. Because of its availability, it has proven over the years to be the best source of installation and extensive use of Node.js packages in Linux, allowing the expansion of its use in the market.

What kind of distributions are supported?

So right, as you can see, we support major Debian, Ubuntu, Redhat, CentOS, and Fedora releases and many different distributions based on those. As you can see, the list can't go long, but we are always trying to add more there.

Also, if you are using code as infrastructure, the major recipes, formulas, or plugins that include Node.js installation usually work using Binaries distributions.

So if you're using:

You are already using binary distributions, and it is recommended to use the Node.js installer. That's what the NPM documentation and the NodeJS official documentation say. So it's proven to be the best source of installing these sectors.

A bit of History of Node.js Binary Distributions

How NodeSource get involved in this project?

So, here are some essential milestones for the project:

Now let's talk about how a new release is created.

Process - How is a new release in Node.js created

There are two processes involved when releasing a new version of Node.

So it's helpful to understand how the release lines work. All the releases are scheduled and planned. There are three stages on a Node version: Current, LTS, and the end of life.

Also, there are three types of releases:

So every new LTS is a major release. This is the process for delivering a new version of Node.js.

How the release happens inside NodeSource

We already understand how a version is created. So, every time a new version is released, everything starts from Nodesource Slack. We already have an integration that notifies in a unique channel that a new version is available, so we have to get to work and update to a recent version. We also have some automation that makes our life easier: We have a bot, or infrastructure bot, called Control Tower. It's something we use internally for all everything in our infrastructure. 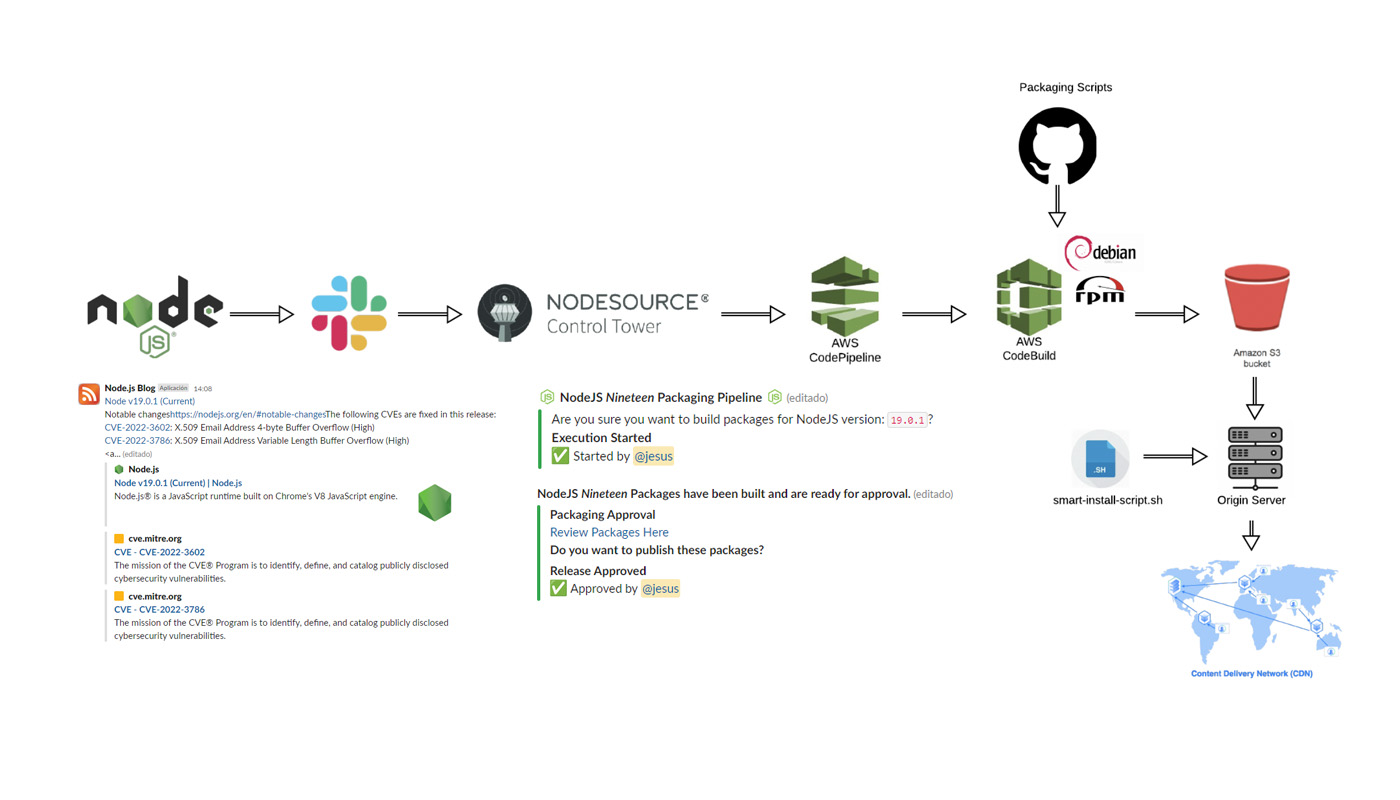 Control Tower allows us to run a single command to generate a new version that will communicate with different pipelines we have in AWS called pipelines. And that will use AWS code build to build the package and all the packaging, generating all the different binaries we need to distribute Debian, rpm, and other formats.

After building those, it will push to Amazon's S3 bucket, and from there, we will have an origin server that will serve all these packages for everybody in the world. That's how it works.

It's a semi-automated process with a lot of automation involved! Now, let's see some fascinating statistics involved in this project. 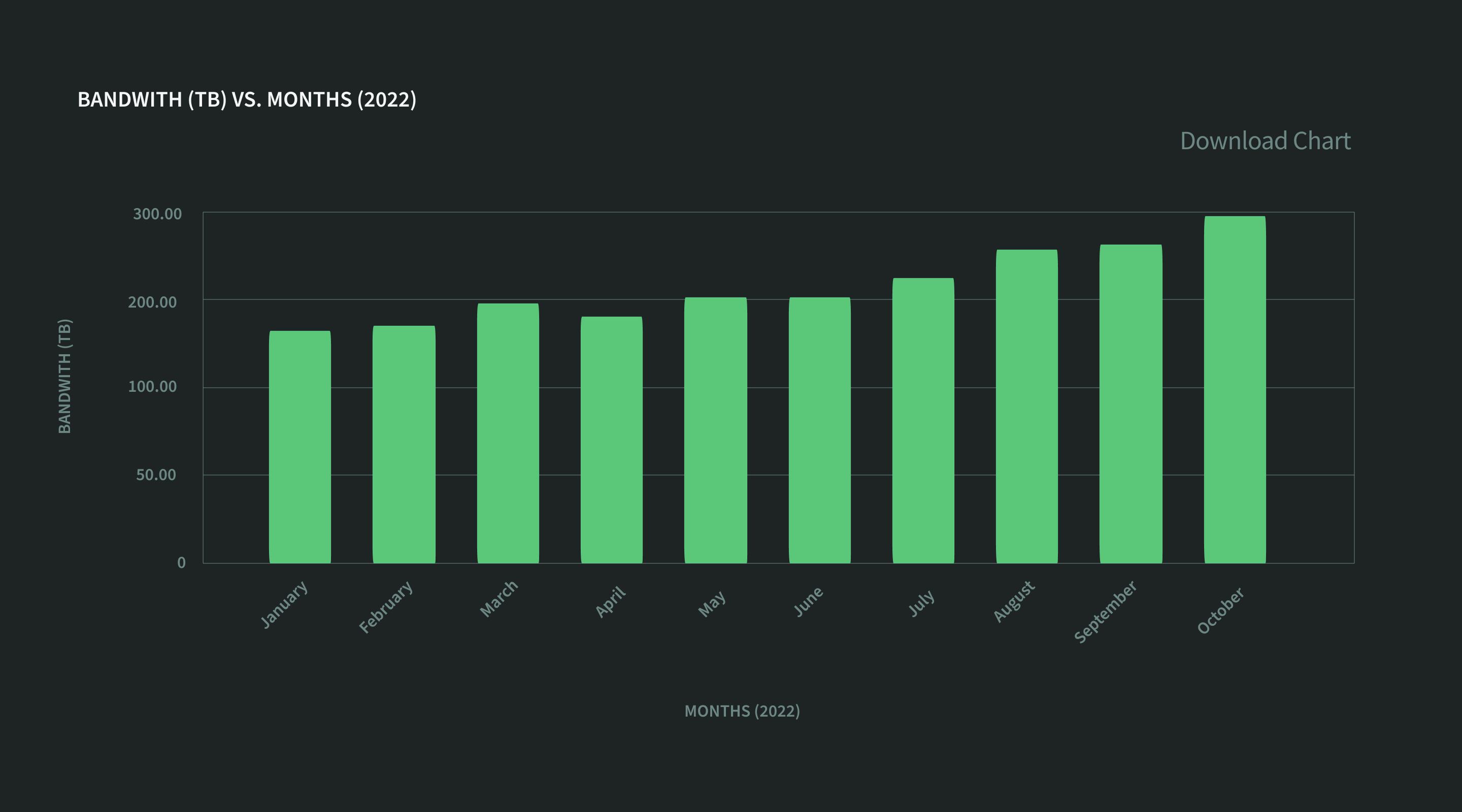 This graph is a monthly download in terabytes 1TB. This year it was 2,135 TB of binaries distributions from January to October.

There is a noticeable increase in the tendency of downloads, and this year the downloads are even more remarkable. In just one year, the increase was about 4,7% in downloads.

Again, this is a lot of data, and we expect these numbers to keep increasing as the Node project expands.

Now we are going to analyze the numbers by version. This is very important. Let's take a look.

As you can see, people are still getting old versions like V6, which was deprecated. Then we have V8 and V10 with a few people; others are using V12 and V14, and some are using V15 and V16. Now let's go to analyze the current status.

So this is 2022, and as you can see, many people still use V12. But the good news is that most people are using V14 and v16. We can expect V18 to start growing, as it became LTS at the end of October, and it's the latest LTS we support.

If you want to try these things on production, it's really good to use stable versions; we always recommend using in production the latest LTS. Please read this article to understand why it is important and useful to try Node.js V18 LTS.

Now let's see where those downloads are happening worldwide and where people consume Node.js most.

The top five countries consuming Node.js binary distributions between 2021 and 2022 were the US, Germany, France, the UK, Ireland, and the Netherlands.

As we can see in this image, at the end of October of this year, 2022, there was a release, reaching Oct 25 with Node 18 12,185 downloads, and every time there's a new release in Node.js, there is a peak in downloads of binaries distributions.

For Node V19 we started having downloads on October 19 with 1,594 downloads that day.

Note: If you want to be aware of the important dates of the project, here you can consult the: Node.js Project Calendar

Two types of deprecations could happen in our channels:

Please update your Node.js, or you will see this thing when you're installing the Node.js version that you are trying to install. We always present this Deprecation warning, and we make you wait 20 seconds so you can read the message and realize that maybe you should be updating your Node.js version. 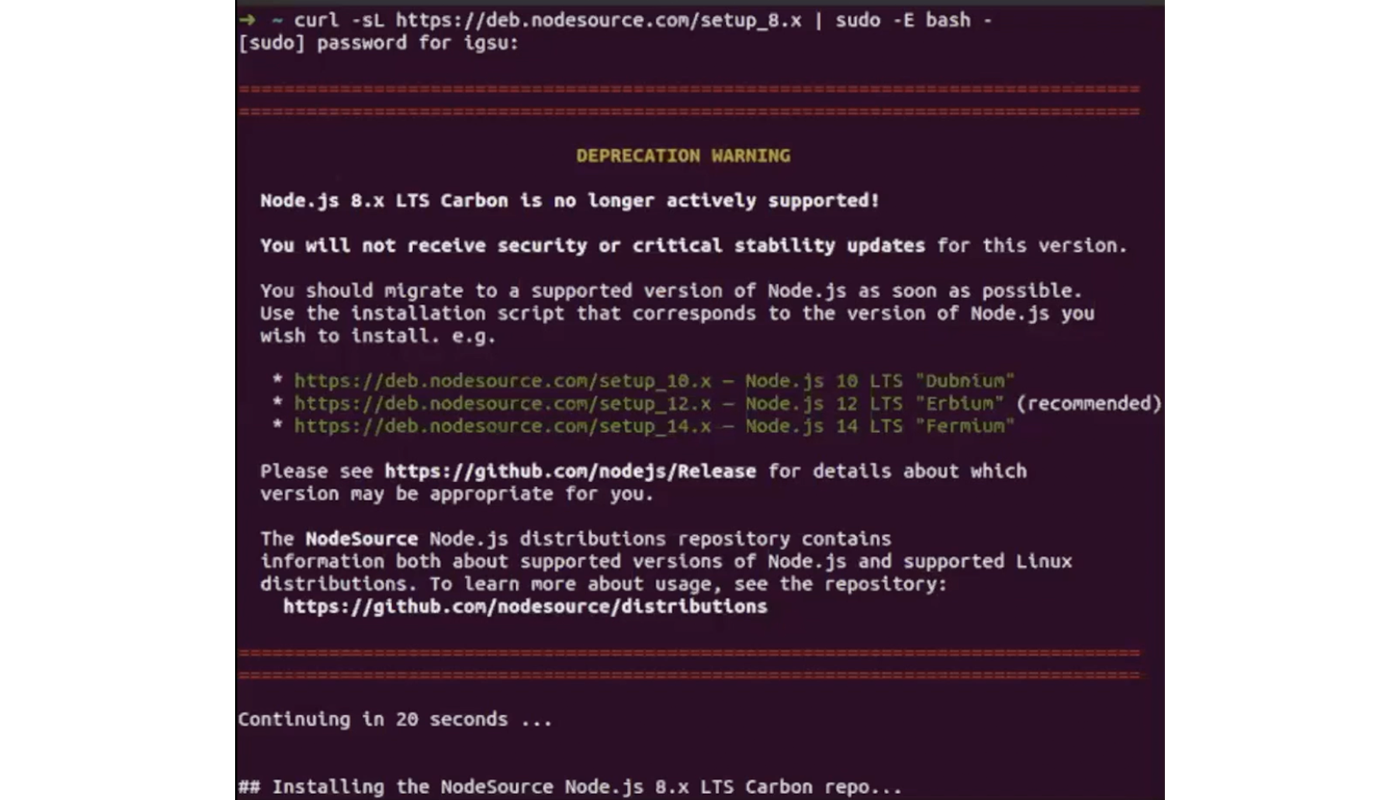 Today, many people are using no longer supported versions. About 46% of downloads of Node.js versions were no longer supported. We want to launch a campaign encouraging developers to upgrade their node version. #UpgradeYourNodeVersion

So, how can you get involved in this project? There are many ways to contribute.

First, you can go to this link: https://github.com/nodesource/distributions

In that link is the repository where the project is hosted, and you can submit an issue, comment, or pull request. And it's related chiefly to supporting new distributions to upgrade a distribution or to create an update script to download a particular distribution.

Another way is to keep updated documentation. If a new version over distribution changes, it should also be updated on the docs. When you submit an issue or a pull request, suggestions could be made to keep it compatible with the rest of the distribution, and submissions are always working.

If you collaborate with this project for a few months, you can ask and be included in this repo as a collaborator 💪.

Using NodeSource Node.js distributions is the best and most recommended way to install Node.js in Linux for production environments.

NodeSource has delivered Node.js fresh to your Linux system via your package manager within hours, minutes, days, or weeks. For NodeSource, sustaining the community is essential because we want to support more people using Linux to have Node.js in production.

Also, we are looking for more community involvement in the project. So most of our scripts are open source, and as you can see, there's a lot of activity in the report that we just mentioned in this article. Help will be appreciated! So if you have ideas or solutions or want to help us continue supporting open source, you can contribute to this GitHub Repo.

Please join us and be part of this magnificent project. Also, here are our channels to follow us and continue the conversation:

If you are looking for NodeSource’s Enterprise-grade Node.js platform, N|Solid, please visit https://downloads.nodesource.com/, and for detailed information on installing and using N|Solid, please refer to the N|Solid User Guide.

We We also know that as a start-up, you want ‘Enterprise-grade’ at a startup price, this is why we extend our product to small and medium-sized companies, startups, and non-profit organizations with N|Solid SaaS.

Please help us to reach more people and support use cases in Node.js. We care about the Node.js community! 💚You're welcome to explore, read, and participate in this project.