2020 has been a remarkable year, full of change and reinvention. Yet one thing remains the same, NodeSource Node.js binary downloads keep increasing month by month, providing millions of users around the world with the power of Node.js.

Node By Numbers 2020 gives us important insights into the usage of Node.js across Linux environments and the Node.js community in general.

Nodesource has been packaging and distributing Node.js for Linux environments for 7 years. Every major and minor release as well as security updates. We've seen a massive increase in downloads every year and 2020 has had the most yet. While we don’t distribute every version of Node.js, most of the downloads in Linux environments are provided by us.

Have you ever wondered how many people are still using Node.js version 0.1 and other outdated versions? Hundreds, or maybe millions? Which are the countries that consume Node.js the most? What versions and distributions are the most popular? What are the downloads of Node.js month by month? Are they increasing or people are moving away towards other technologies? Let’s find out!

In this article, you can find interesting data about the consumption of Node.js around the world in 2020, the trends, spikes, and odds of the usage of the popular runtime that powers millions of applications.

Let’s begin by understanding what is “Node.js Binaries Distribution”, in simple terms it’s a method where the software - in this case, Node.js - it’s given to the public in a compiled form for its usage. The package of the binaries allows them to be accessible from the repositories that use Debian and EL distributions by default. Making it easier to install, distribute and deinstall.

In other words, it represents a more efficient way of managing Node.js in Linux environments.

NodeSource is the primary distributor of Node.js Binaries in Linux environments, you can find the repository here. In Linux, there are two main ways to package files, rpm and deb. The .rpm files are used primarily by distributions that derive from Redhat based distros (Fedora, CentOS, RHEL). The .deb files are meant for distributions of Linux that derive from Debian (Ubuntu, Linux Mint, etc.). 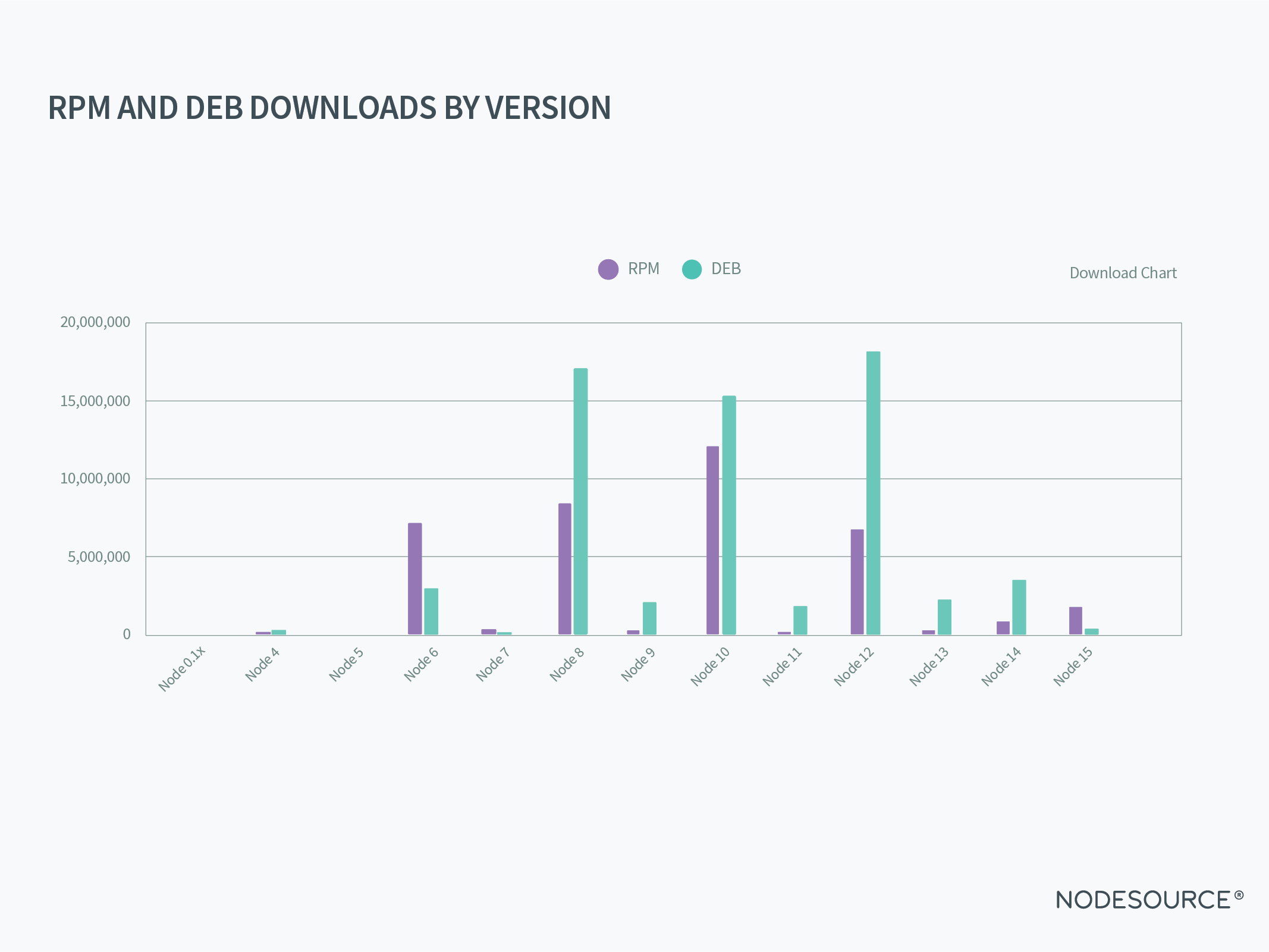 There were a total of 98.9 million NodeSource Node.js Binary Downloads in 2020. As we can see in the graph above, the most downloaded Node.js version in rpm is version 10 with more than 11.7M downloads. In the case of deb is version 12 with 17.6M downloads. This means that deb users tend to be more updated with the latest versions than rpm users.

This is not surprising since v.10 and v.12 were both LTS in 2020, but there is still a surprisingly high amount of users downloading outdated versions. Node.js v 0.1 was downloaded, wait for it... 65K times. And from version 4 to version 9, (which are non-supported versions) 37.5M times in both rpm and deb.

A more complete analysis of the usage of non-supported versions can be found below.

Also, Node.js version 14 and 15 which were both released in 2020, had a considerable amount of downloads with 4.1M and 1.9M respectively. 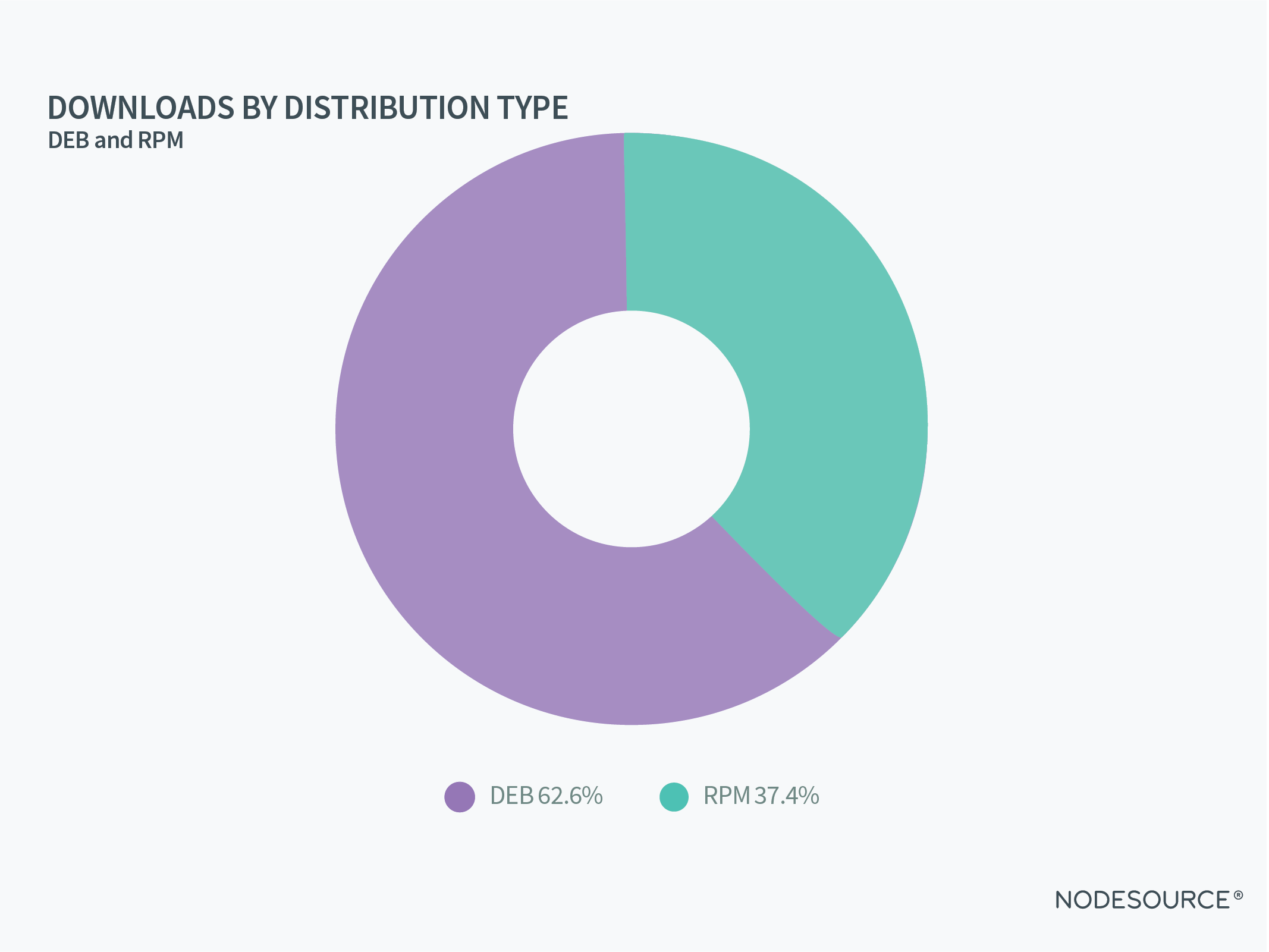 Following the trend in the market, deb package system is more used than rpm. In this case, 62.6% of the downloads were deb and 37.4% were rpm. The 4 most popular Linux distributions are MX Linux, Manjaro, Mint, and Ubuntu, and 3 of them are based on Debian except Manjaro which is Arch.

This follows the trend in the market since the rpm update cycle is every 5 years, and deb does updates annually, so deb is more preferred in the public. 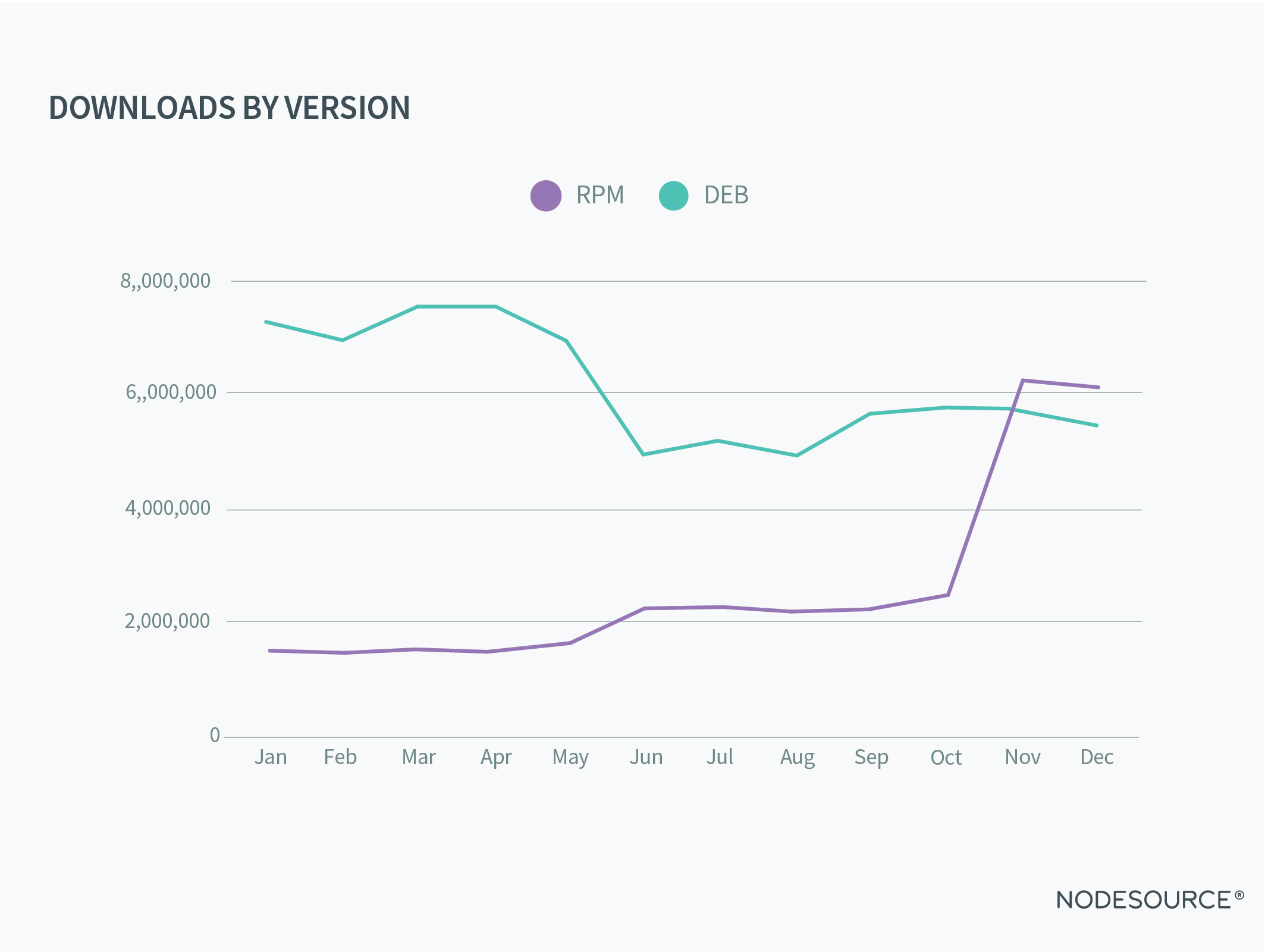 In January 2020, there was a significant gap of downloads between rpm and deb with 1.5M and 7.3M respectively (5.8M difference) but towards the end of the year, rpm downloads increased dramatically, surpassing deb downloads 6.1M vs. 5.5M respectively.

The increase that has been noticed in RPM packages is mainly due to the presence of mirrors for the distribution of our packages in CentOS repositories, mainly in China. 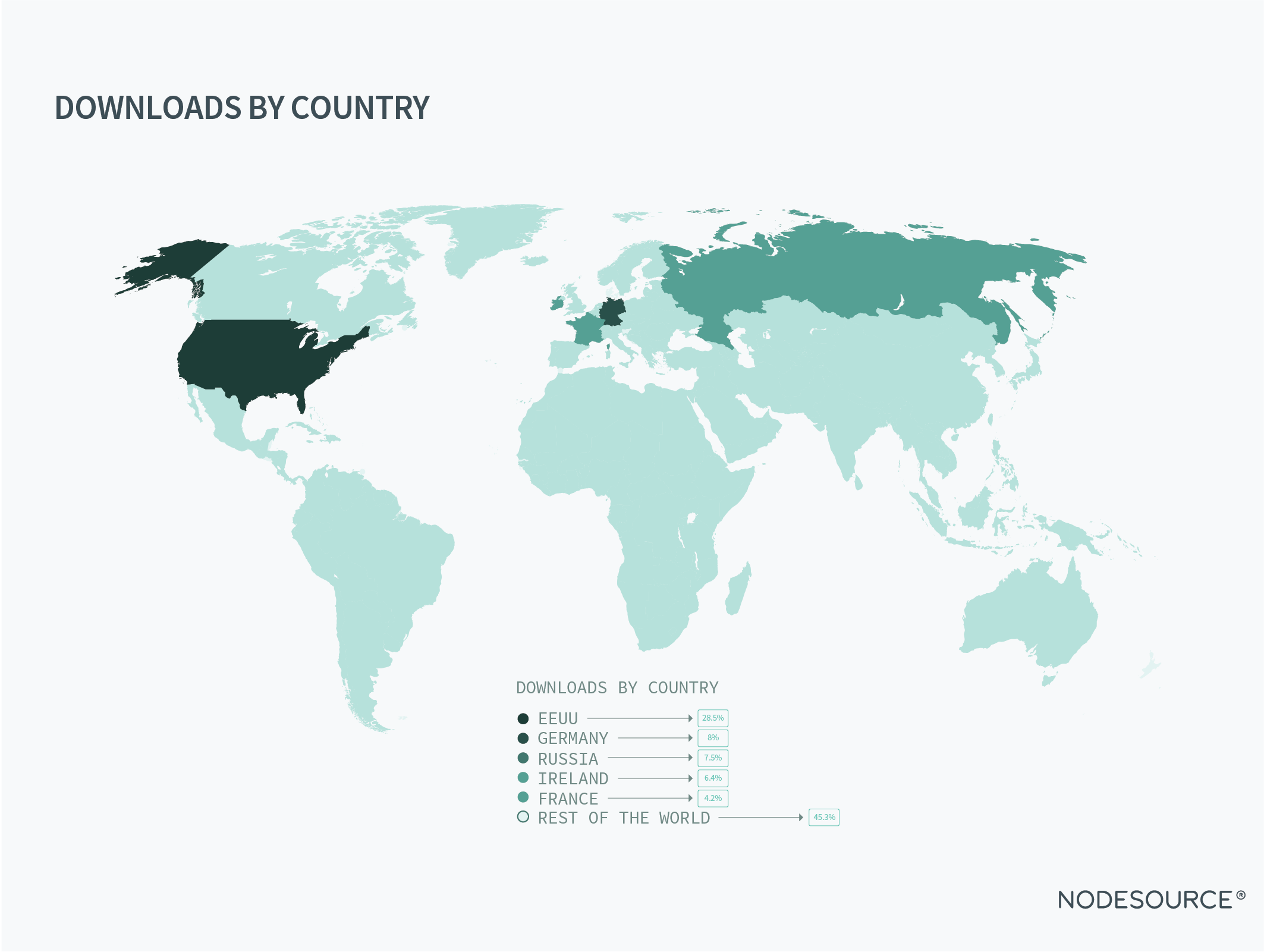 The U.S is the country with the most Node.js Binary Distributions downloads with 28.6% followed by Germany, Russia, Ireland, and France. India ranks #10 with 1.5% of downloads (contrary to what the popular opinion thinks in this poll and the rest of the world has 45% of downloads.

Looking at the StackOverflow survey the main visits also come from the US, followed by India, Germany, UK, and Canada. This shows us where most developers are located and where they use Node.js the most. North America and Europe are leading this position. 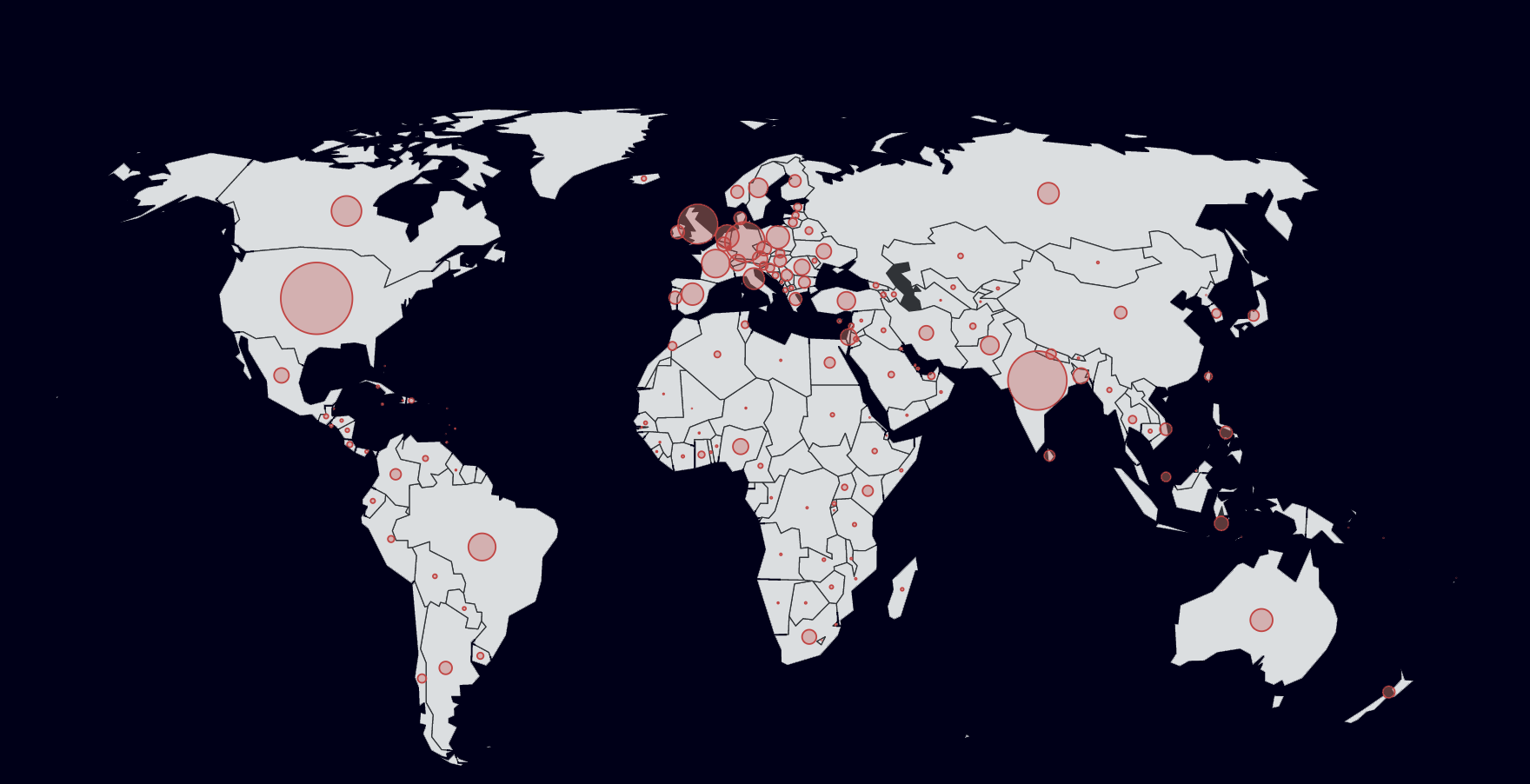 Looking at Octoverse survey we can see the same correlation, the US leading the position, followed by China, Germany, India, Russia. 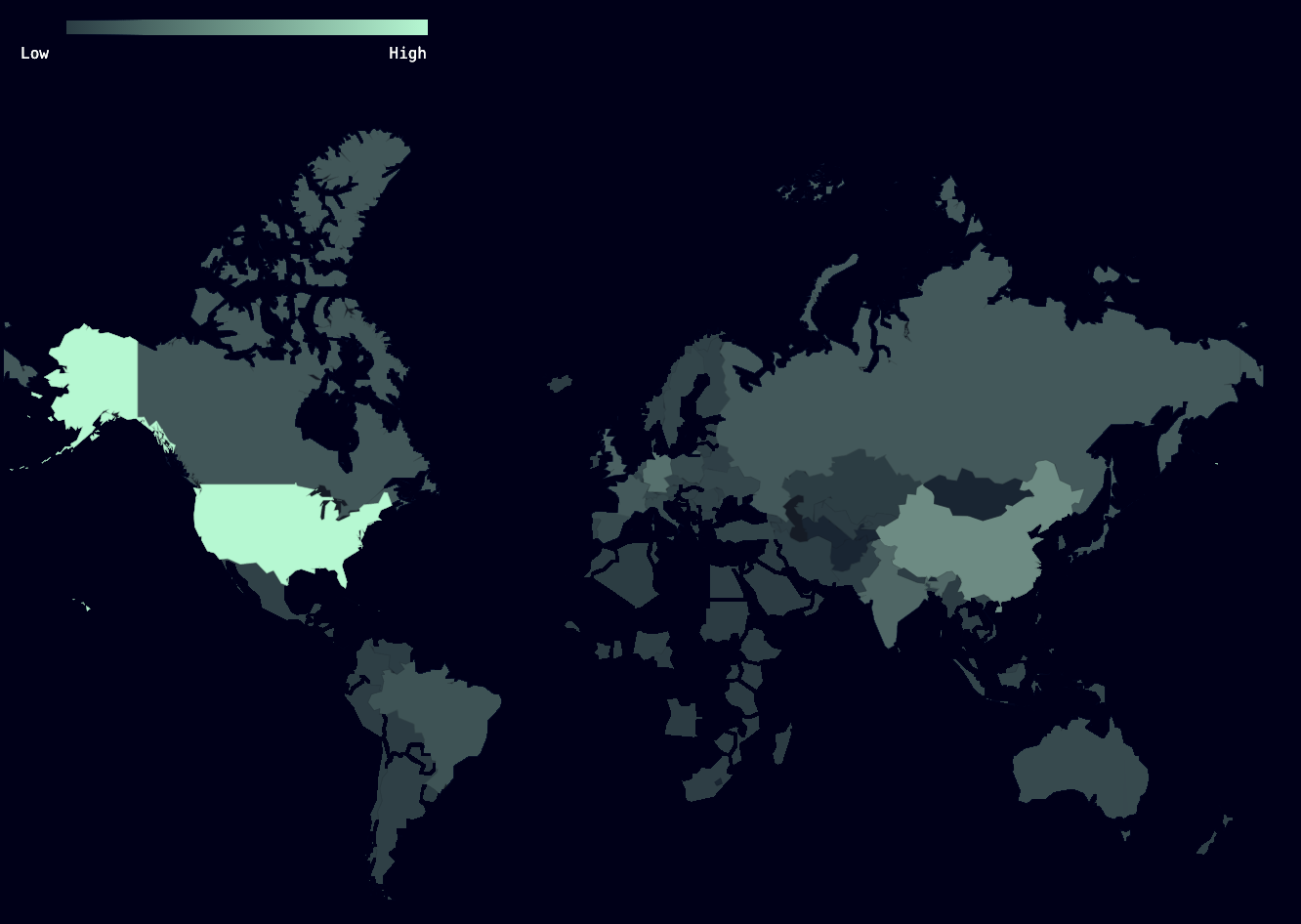 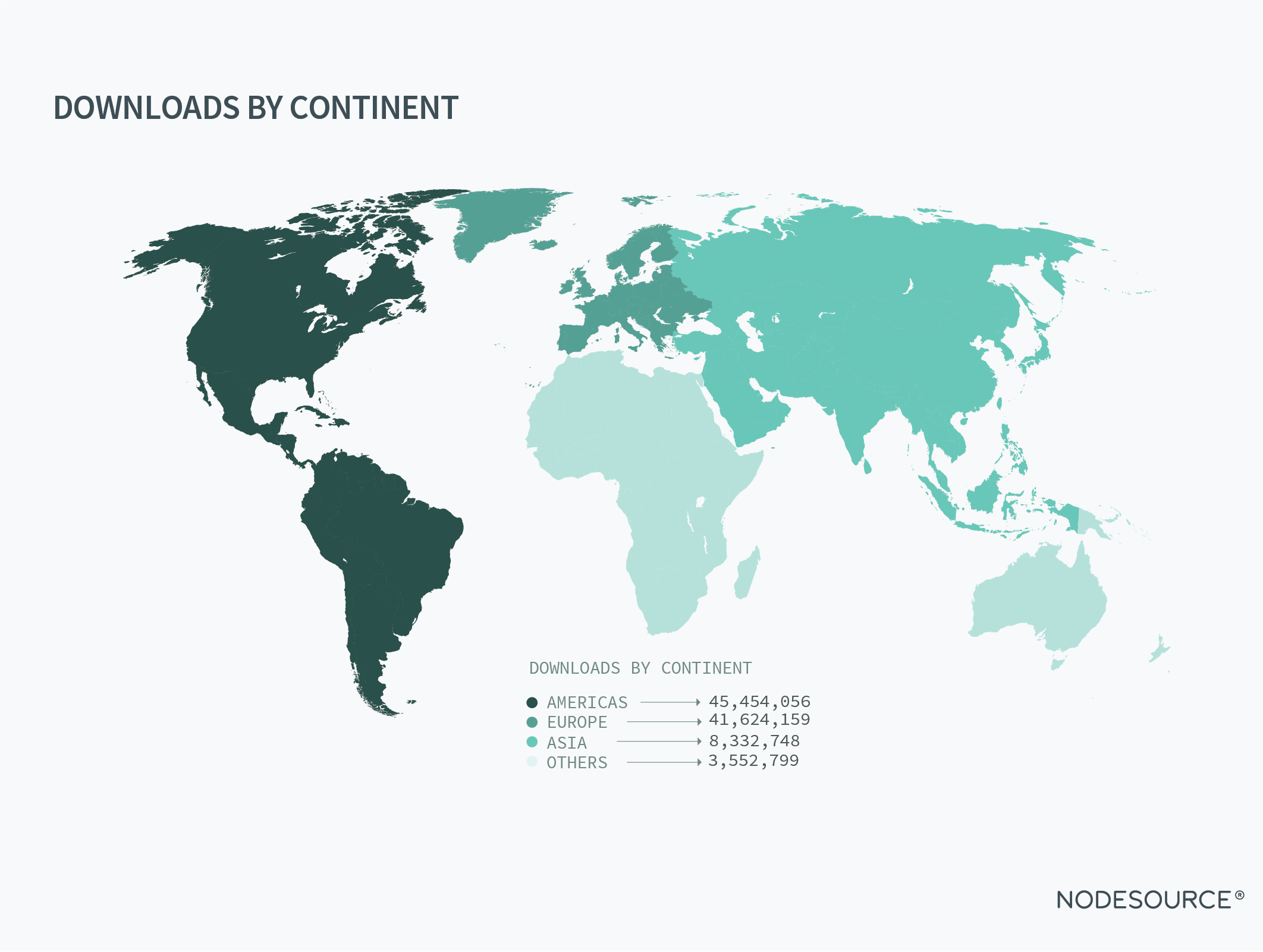 The Americas had the greatest number of downloads with 45.4M of them, followed by Europe, with 42M. Between the Americas and Europe, it has the consumption of 88% of the downloads. Asia has 8.4M and the rest of the world 3.6M.

If we look at the Octoverse survey, Asia participation is higher with 30.7% of users. And the Americas and Europe have 65.7%. 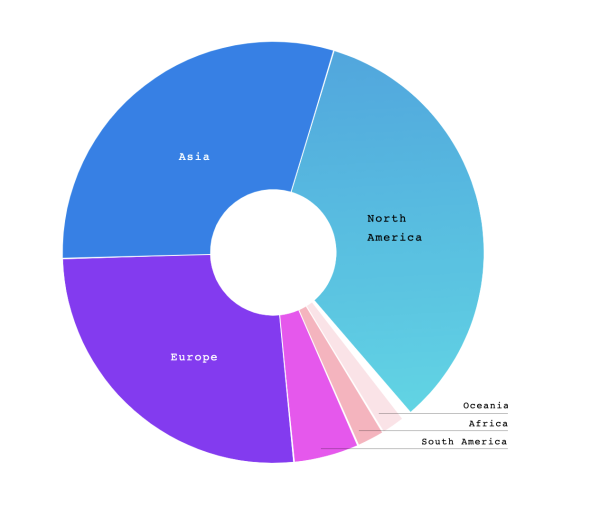 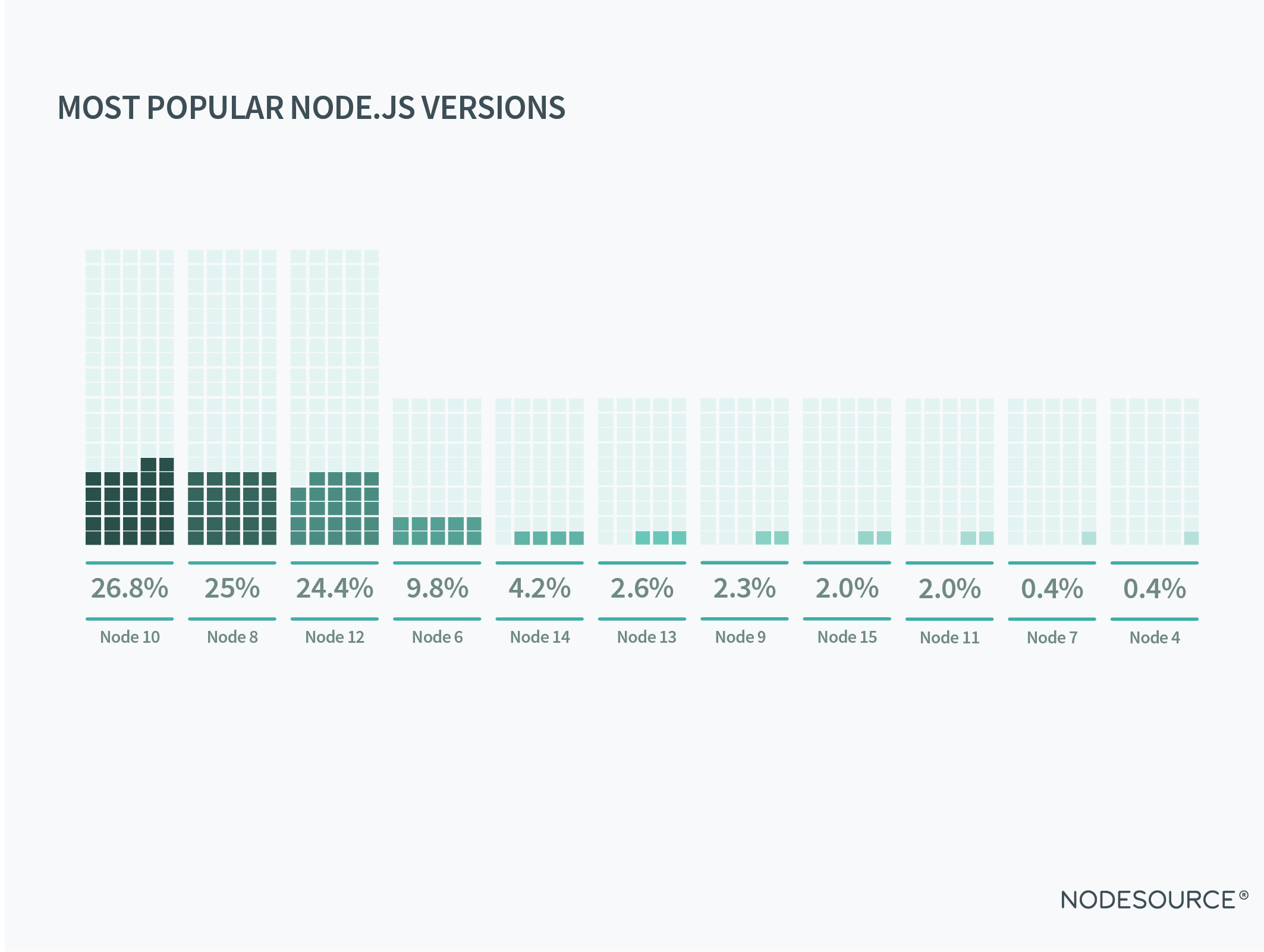 In 2020, Node.js v10, v12, and v14 were the only supported LTS versions, which are the recommended versions to use. These three versions represent 55.4% of downloads, and the non-supported versions represent 38% of downloads. It could be mainly because there are still a lot of legacy projects and migration to newer versions can be challenging and present issues. However it is recommended to always use the LTS versions and if you have problems migrating, you can contact NodeSource for Legacy Application Migration.

There is a correlation between releases and spikes on downloads. There was a security release on November 16, resulting in a large number of downloads for that day (457K downloads).

This is a good practice since it is always advisable to update to the latest version and implement security releases.

NodeSource is proud to distribute Node.js to the world, we highly recommend to use the LTS versions and to support and contribute to the Node.js ecosystem. If you have any inquiries you can contact us at info@nodesource.com and follow us on @Twitter.