#NodeForest : A Greenheart Adventure with NodeSource! 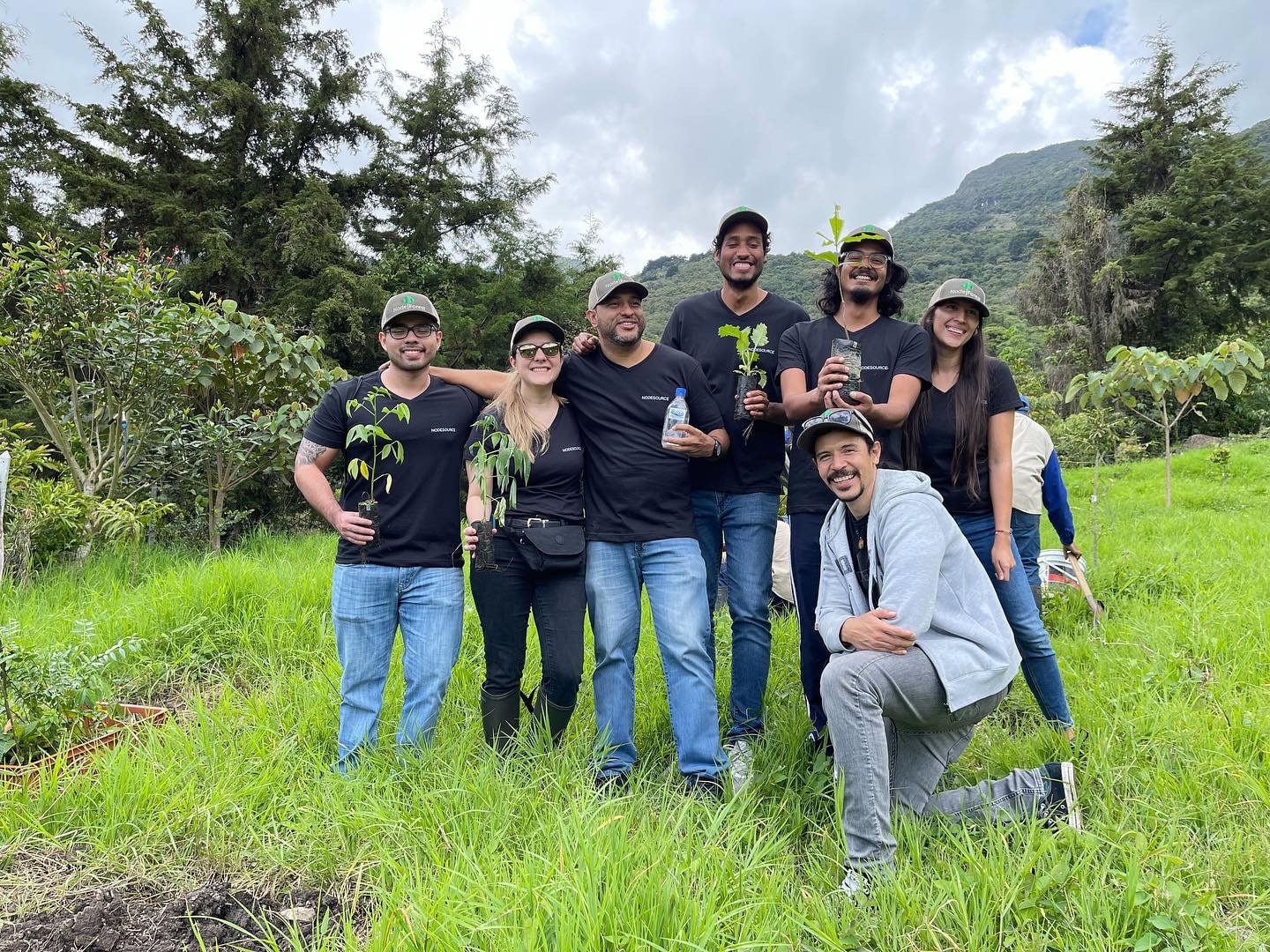 NodeSource has always had the Community as a priority. The word 'community' brings together all the stakeholders we interact with. This also includes the medium and space with which we interact.

In a holistic approach, Community leads us as a company to reflect on our actions and how to take a key part of the world we live in. We recognize that with our product - N|Solid - we are contributing, making Node applications more secure and efficient in the use of resources in their processes, thus minimizing the use of storage and bandwidth. But servers occupy a geographical space, and they require energy, which mostly comes from water.

We also see our digital footprint using the infrastructure, the equipment, and the connections that we use as a team. We understand our impact as a part of the global problem, we are increasingly connected, and the Internet is our home and our world.

We believed it was vital for us to act and provide our help to make our relationship with our planet more sustainable. In search of what actions we could take, the idea of NodeForest came to life - a campaign that seeks to give back to the planet the resources we are spending, reducing our impact and beyond…

NodeForest is a special way we can take an active role in reducing our carbon footprint while simultaneously connecting with our Community. We loved the idea of planting trees as a way to do our part. We began to investigate the best place to do it and select the strategic partner to implement our idea; we found both in Colombia.

Our team in Colombia currently has seven collaborators across support, infrastructure, development, and marketing. We come from 4 main cities (Bogotá, Popayán, Ibagué, and Medellín) with the greatest presence in Medellín. Medellín is the second most important city in Colombia and is widely known for being a green city and being recognized as a technology hub and destination. It has the nickname of 'City of eternal spring' for its great variety of flowers, the fertility of its soil, and the favorable climate.

Medellín is part of a Valley, so it connects with other small cities that make up what is known as the "Valle del Aburrá." Ten municipalities make it up, including Copacabana, located north of the Valley.

Fun Fact: There is another Nearby Valley, the small towns of eastern Antioquia that make up the 'Valley of San Nicolás' where 23 small cities are located that enrich this land.

In Medellín (In the Valleys), it constantly rains, making nature exuberant, and the soil lends itself to planting various species. Colombia is one of the most biodiverse countries regarding insects, birds, butterflies, pollinators, etc.

This special place, combined with our fantastic team in Colombia, made our decision to plant our NodeForest in Colombia!

We began this adventure by choosing the company that would partner with us on this adventure in Colombia. After analyzing several suppliers, we decided on PAL, a young Colombian company genuinely committed to the environment. With them, we felt that this was a process that mattered to them. They were instrumental in helping with all the technical specifications for our planting. After all, there was much more to it than choosing a green place and putting our trees there. We wanted a place that met the requirements of being a life-creating ecosystem, and PAL helped make that happen, contacting Aveza.

We selected a place with a unique source of water, the aqueduct of a community in the mountains of Copacabana. A community plan has been executed. They have managed to reforest and recover areas for planting trees, therefore achieving enough flow to provide water to 800 families. A total of 3,200 people benefit from this cooperation.

The water reserve is a model to follow in Colombia. They have won various awards for the environmental protection project. The rural aqueduct has a 72-hour water reserve and produces 1 million 300 thousand liters with its three treatment plants.

"Where there is forest, there is life; therefore, there is water, Aveza transmitted to us, the group that received us for the planting. Our Forest was planted in a high-altitude forest (2,000 meters up), where there are 297 species of native trees already planted, 114 species of birds, and more than 70 forests heliconias. The reserve in which we are creating our #NodeForest is between Bello, Girardota, San Pedro, and Copacabana, wherein 80 hectares of land there are 5 of 8 water sources.

Taking a moment to reconnect! 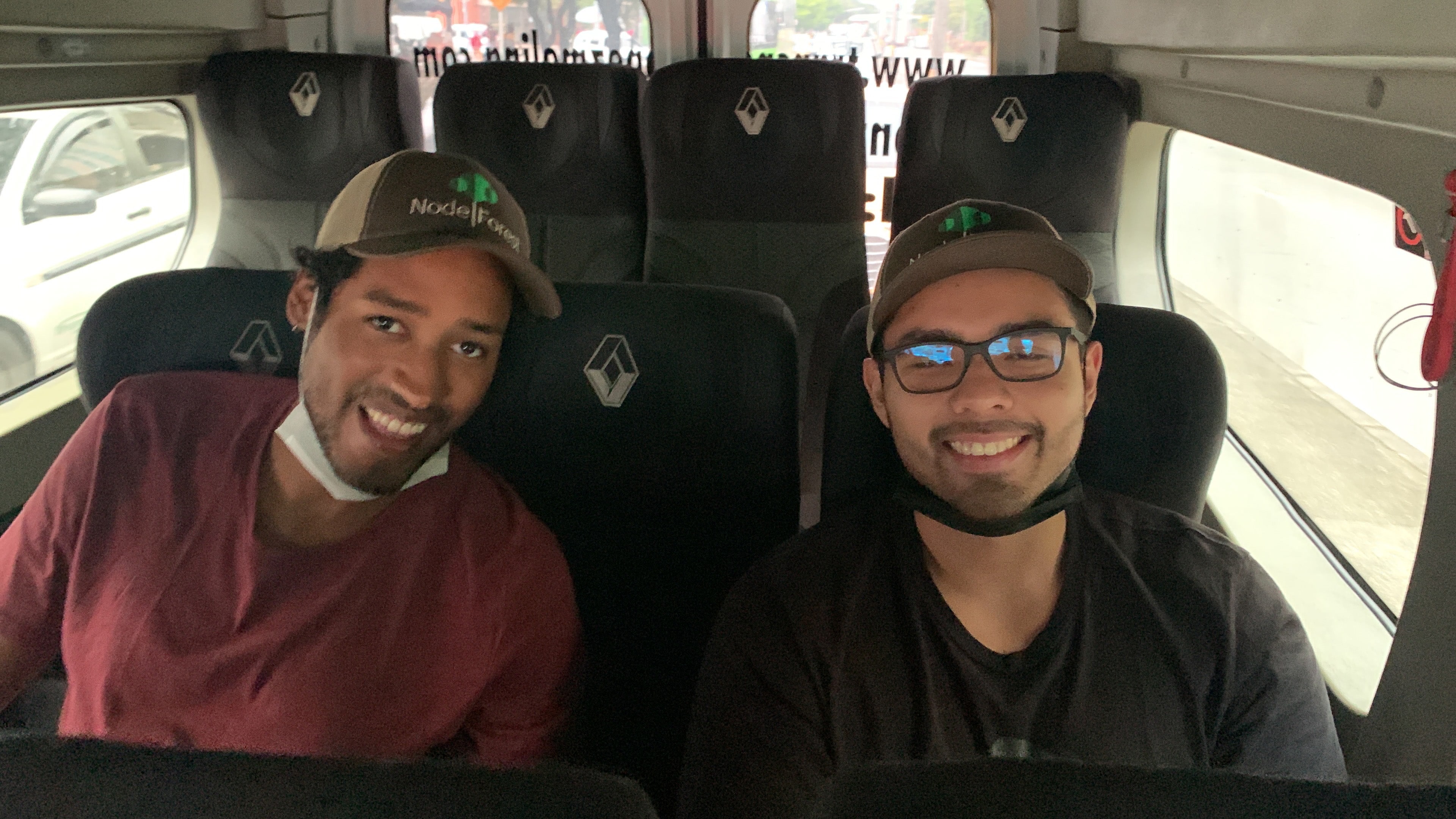 >>Funfact We didn't know Cesar was so tall 😱and Jesus brought us a Popayán delicacy, 'Aplanchados' — A kind of sweet puff pastry. 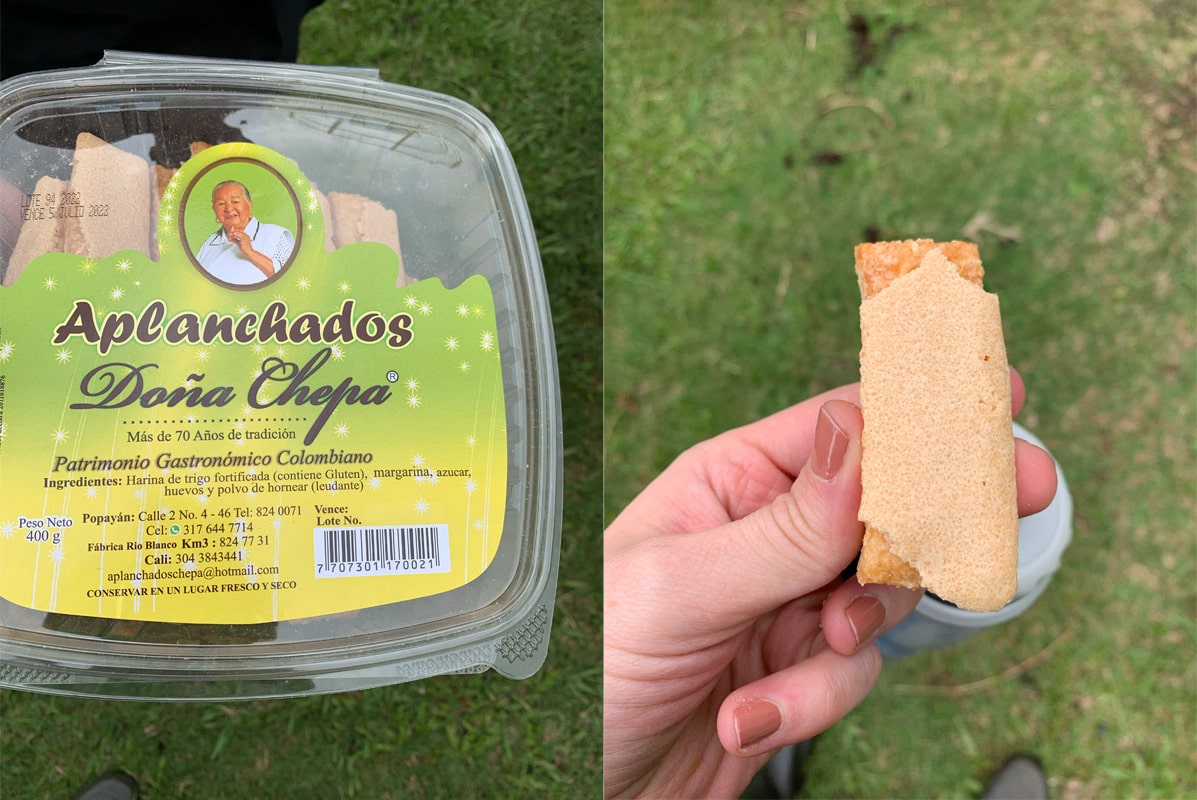 The team's first point of connection was with an empanada, a typical Colombian snack to start the day without knowing that we were greeted with a giant empanada stuffed for breakfast when we arrived at the aqueduct.

From Níquia (which has its name inspire in a indigenous leader) we take the road to Copacabana, Vereda el Zarzal to Aveza Aqueduct, which is straight foward La Chosca (Vereda Curazao).

The van took us there to "La Chosca" store, and from there, it takes 20 minutes to go up to the aqueduct where only a 4x4 can advance and go up. We divided into two 4x4 to meet again later. 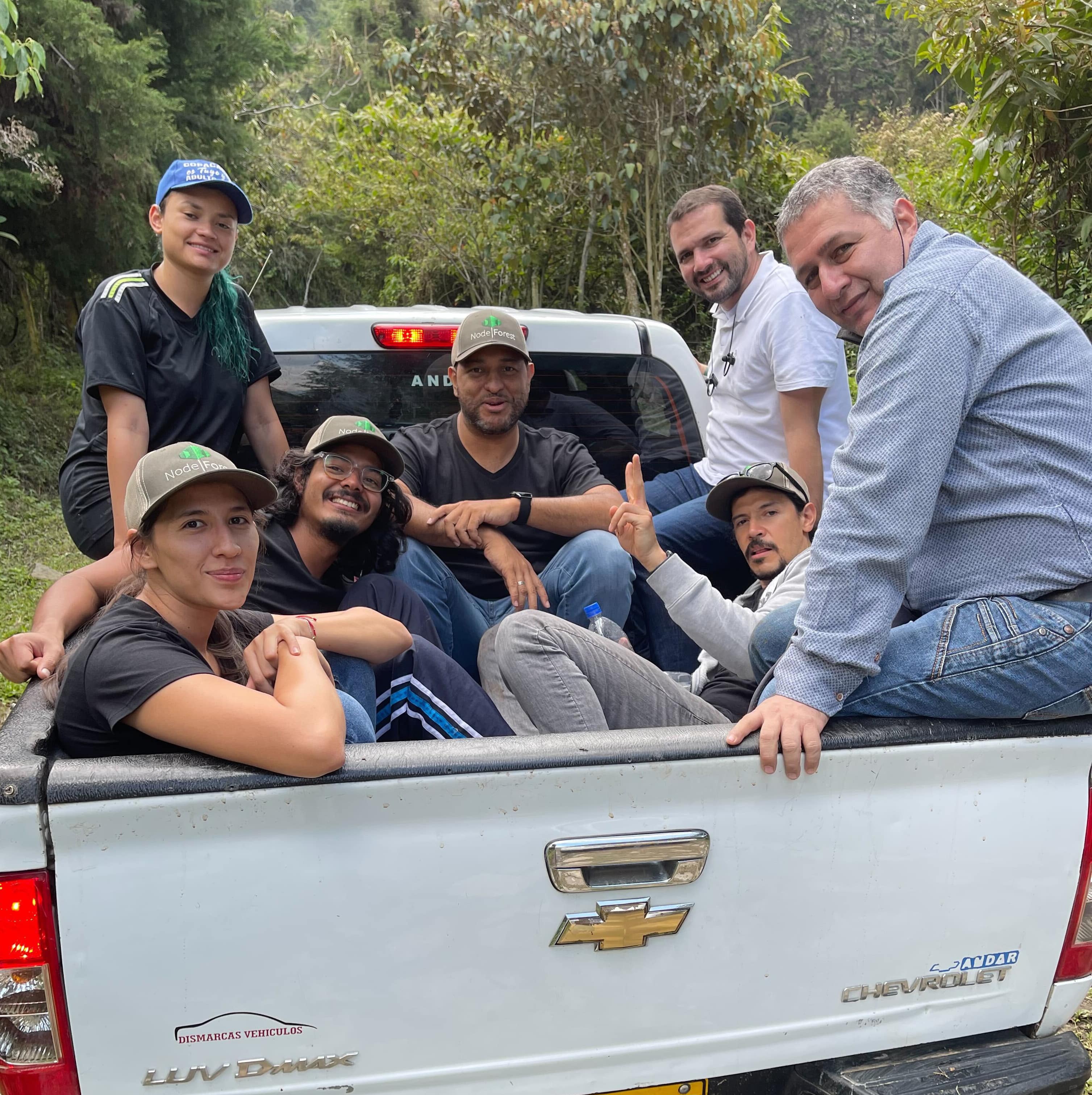 The beauty of the activity is that the regional leaders were waiting for us, again with empanadas! 😅 very round ones, more similar to 'Papa Rellena,' another typical Colombian snack. They told us about the plants surrounding the trees, native species, and their properties. 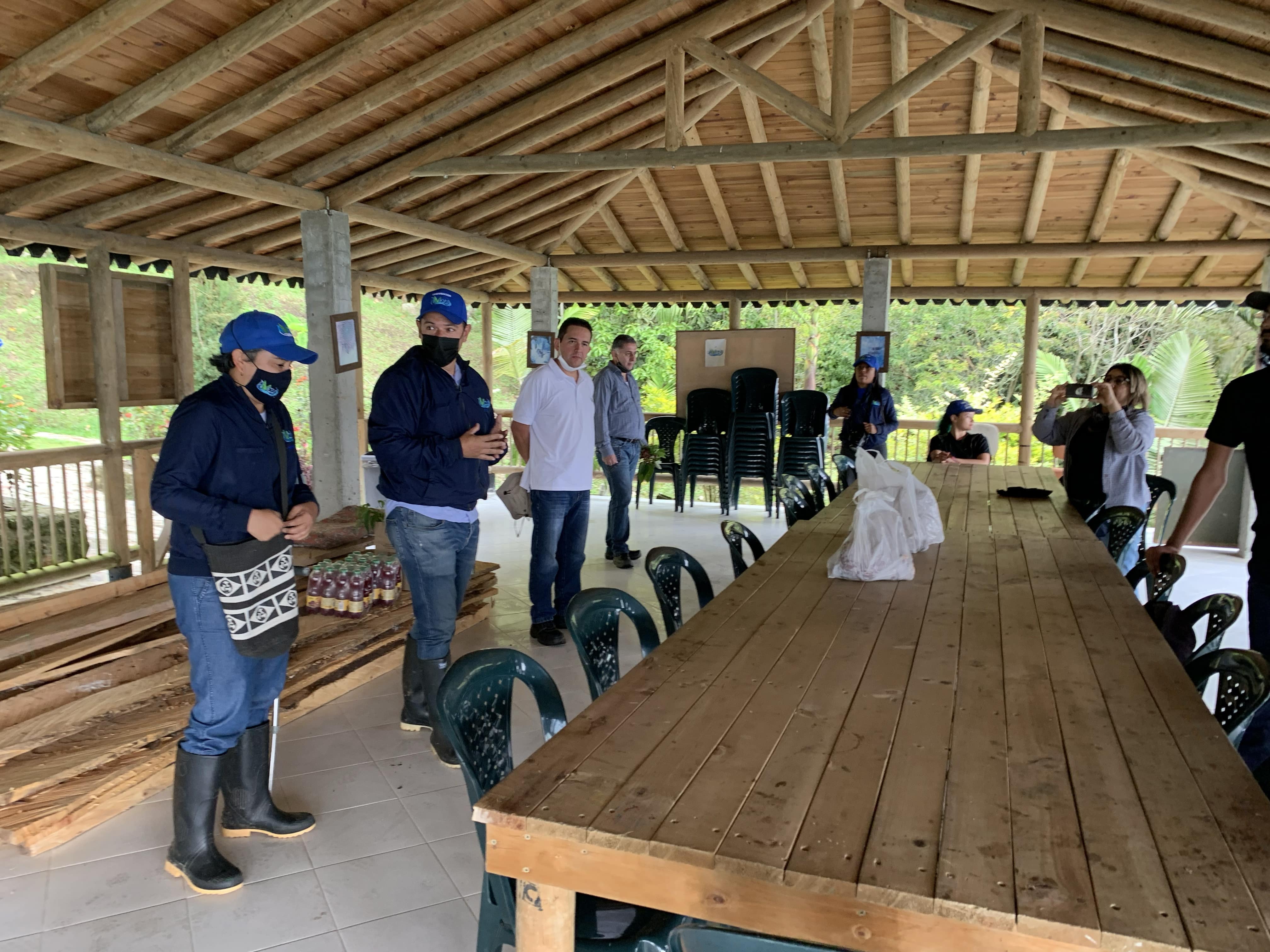 We had the opportunity to eat "Zarzamora," a quite delicious wild berry that grows in our mountains, and we met a plant called "Lavaplatos" (Dishwasher). It is called that because it is the one that our grandmothers used to wash clothes, they made a home cleaning preparation. 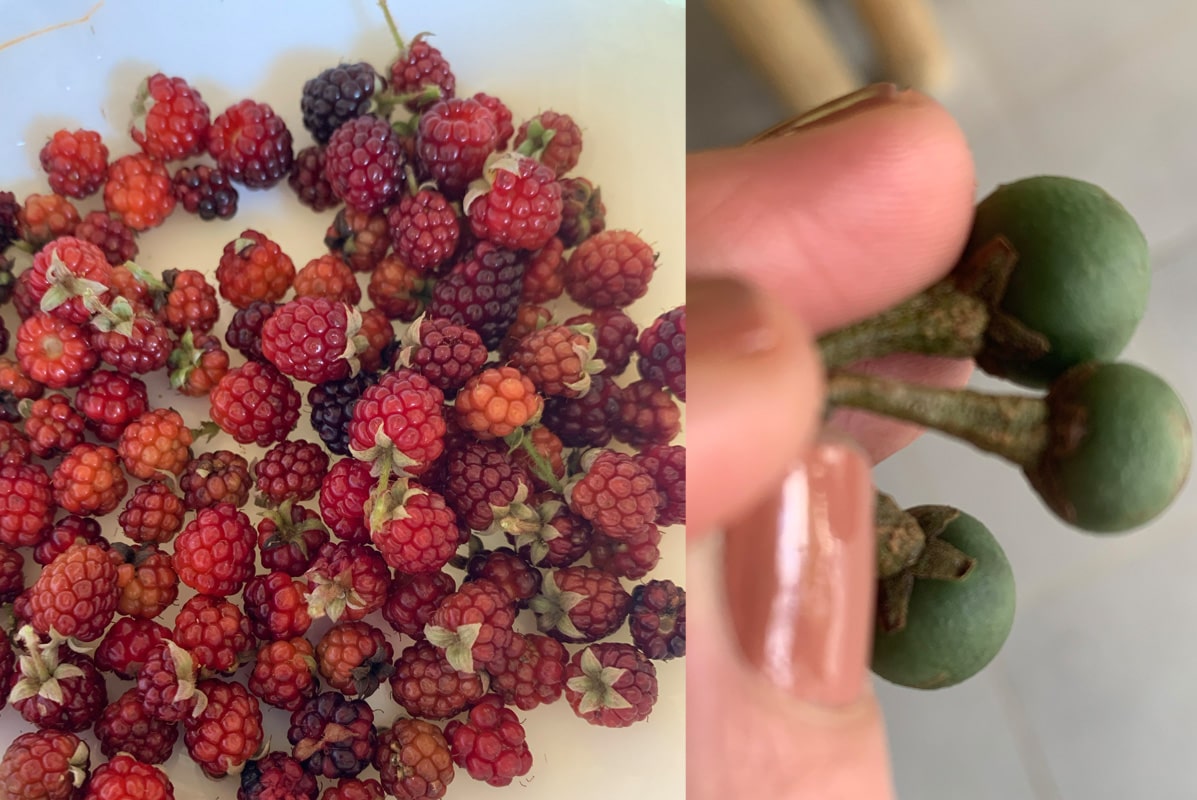 From the dining room/meeting room, after introducing ourselves and being part of the families involved in the community project accompanied us (They told us that many more wanted to meet us, and we're honored that we had them in mind to be part of this initiative) introduced us to the water treatment tanks, and the different stages and processes that they carry out as an organization. 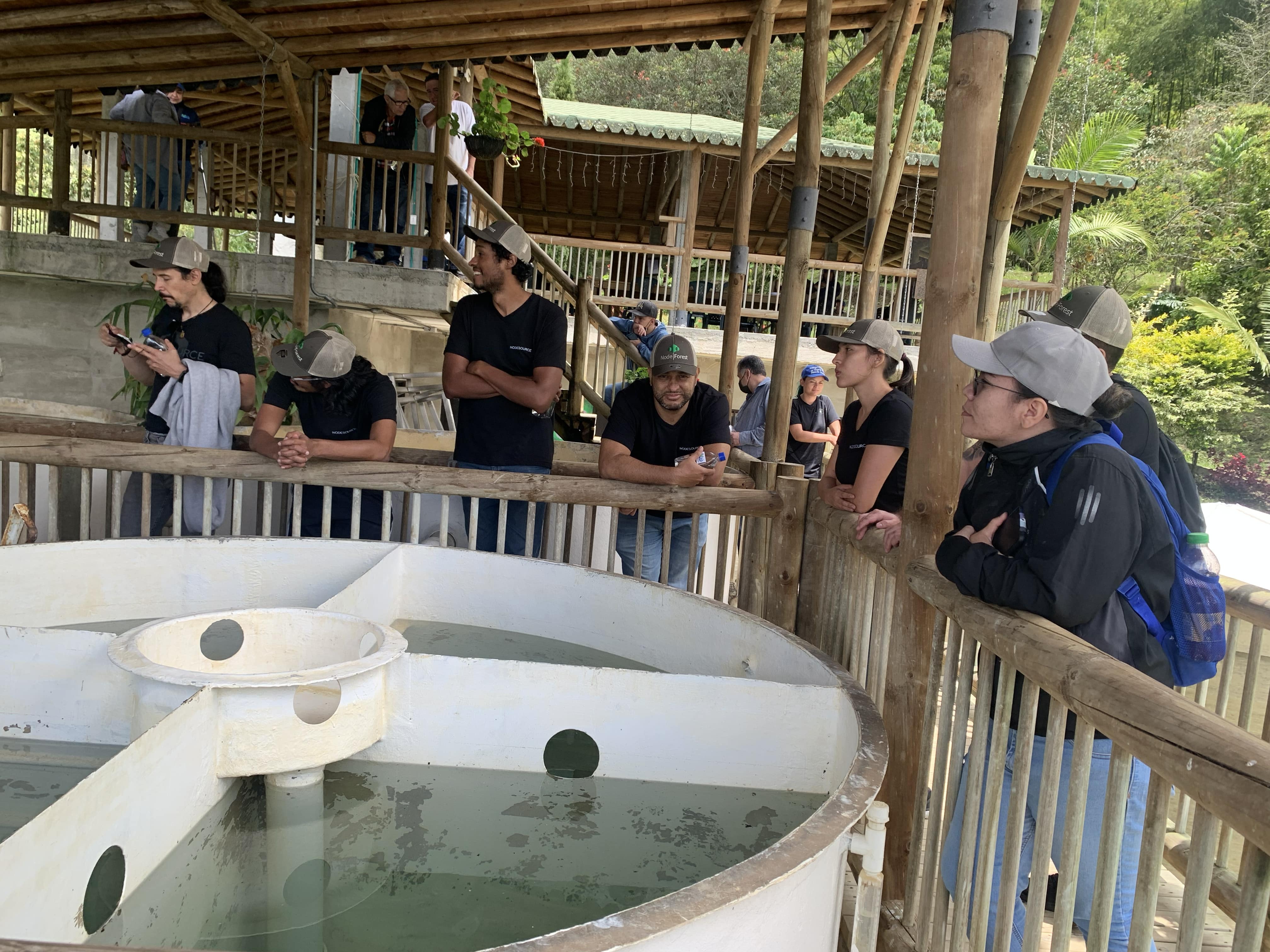 From there, we moved to see a system of orchards that they have to distribute within the same population of the aqueduct, where they produce their fertilizers and carry out composting. In the garden, we distinguished +15 species of vegetables and herbs. 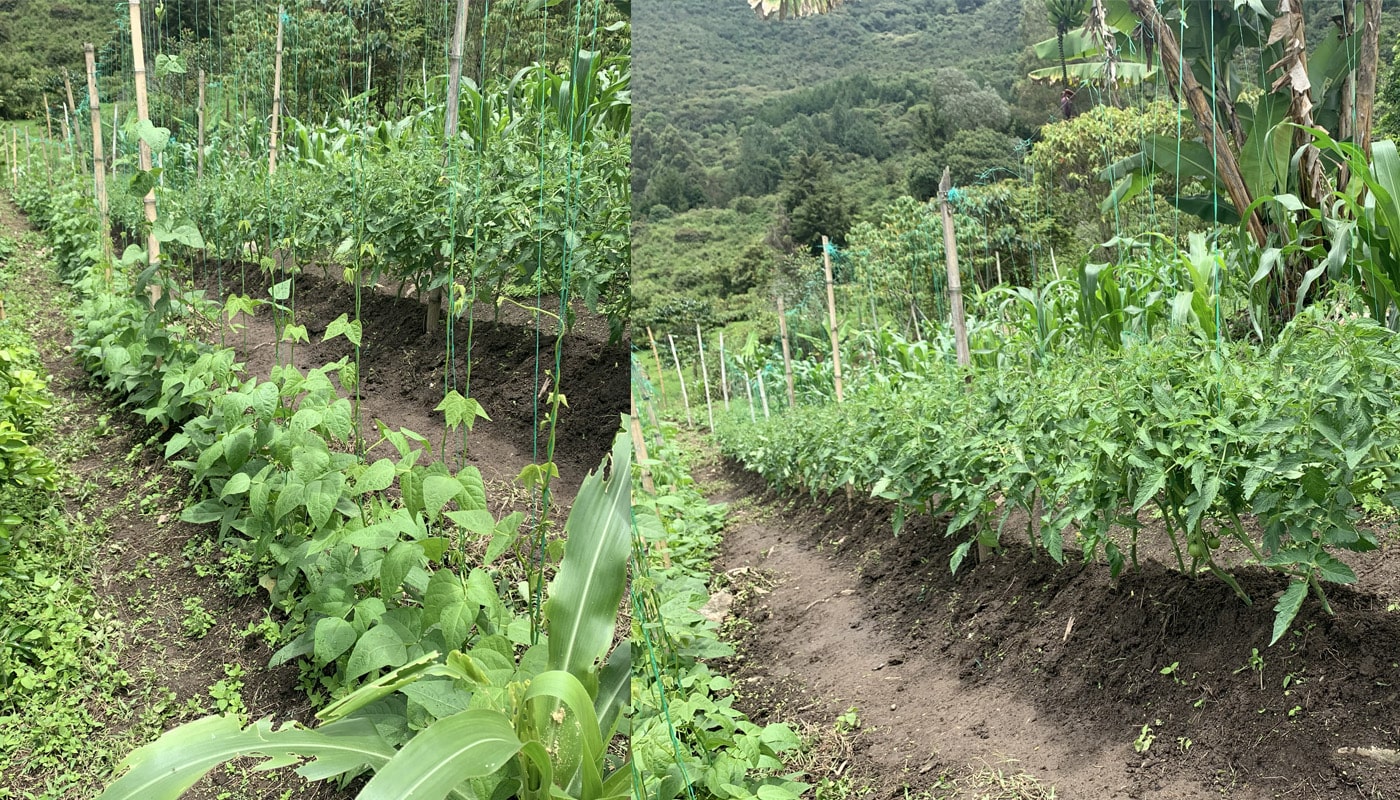 Finally, the trees were near the herbs and vegetables; they introduced us to the Yucca tree (which our colleague Cesar was explicitly struck by because of its beautiful color). Or the Balso tree, a material that architects use a lot in their models. 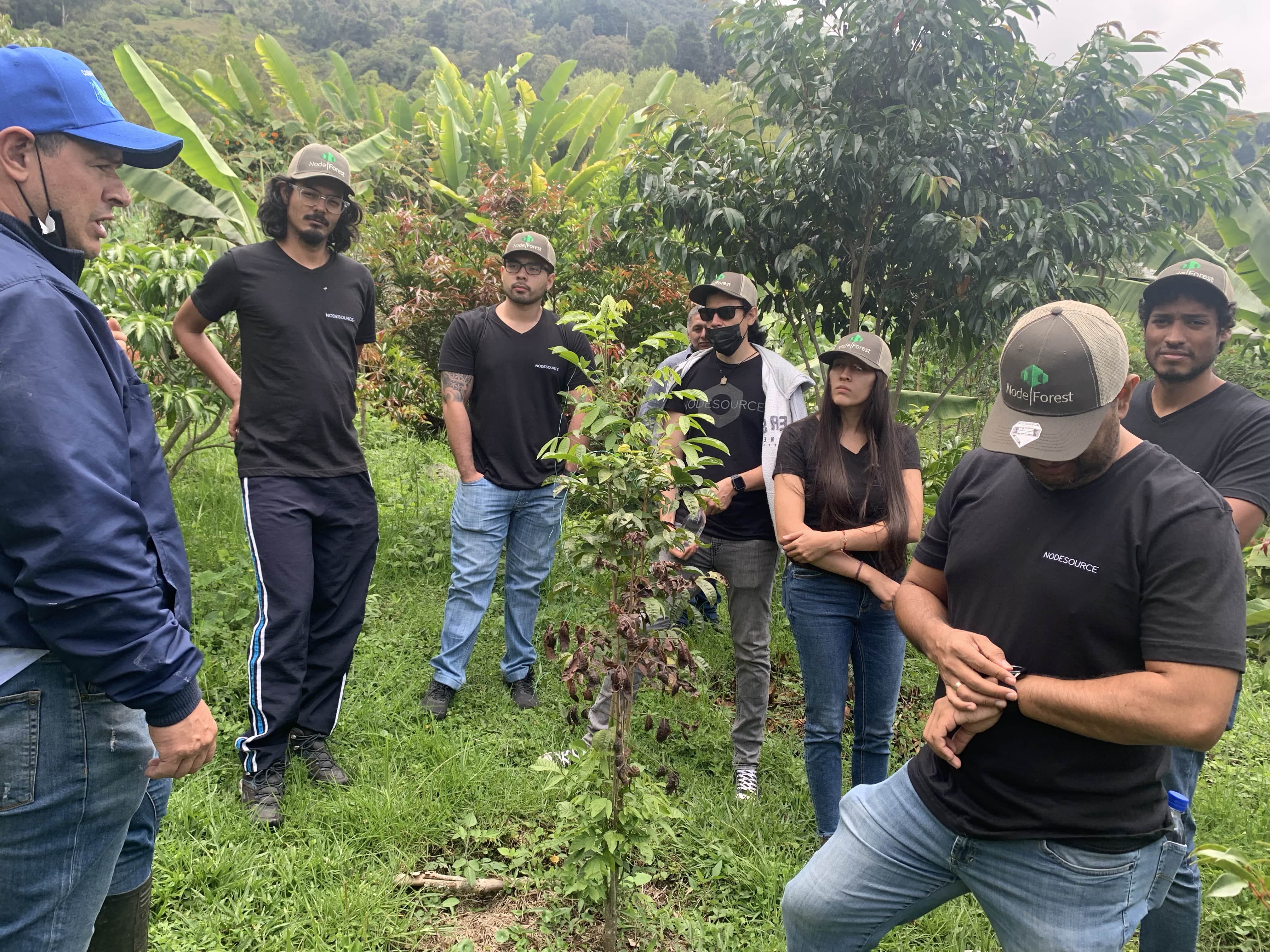 Additionally, we were surrounded by Guayacanes, Dragos, Ceibas, and other magical native trees of our country. I particularly want to write about the Guayacanes (Andro hantus chrysanthus), because I know that for many, Japan is famous for its blossoming cherry trees (Sakura), or Mexico for its Jacarandas and their beautiful purple flowers.

In Colombia, we have a tree whose color is 'Amarillo' / Yellow, and it looks like something out of a Gabriel García Márquez novel or the latest Disney movie, Encanto.These trees take between 10 to 15 years to flower from their planting, and each year they bloom near the rains, lasting flowering for a couple of weeks (5-10 days). The times to see them in bloom are between March and April in the first part of the year in Medellín and Aburrá Valley.

These beautiful trees can be found in another pink color (Tabebuia rosea), but yellow ones are the most common in Medellin. Other trees are similar to the guayacán, but they are part of other species, and their flowers have different colors (purple, pink, white, and red).

With #NodeForest, we plant several specimens of Guayacanes and other magical species such as Yarumo, both green, and silver, which have pretty particular leaves and presence. I leave you a photo to inspire you. 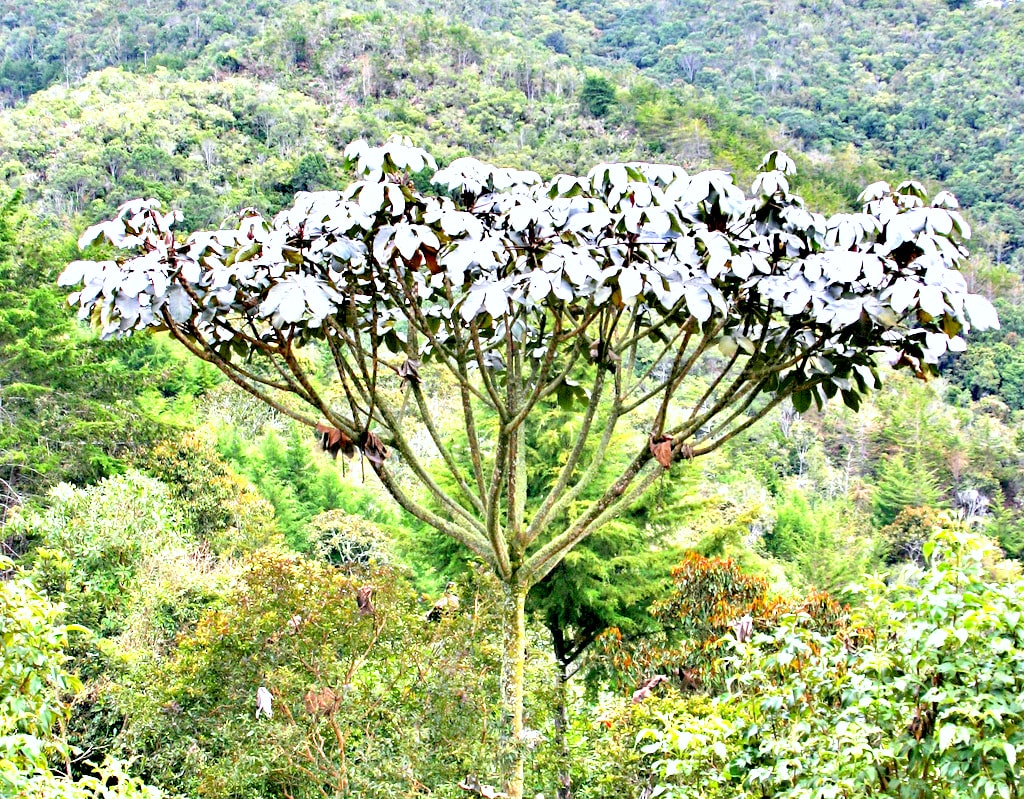 This activity connected us with our environment, culture, and roots. Depending on the mood, each one planted 2 to 3 trees in this part of the activity, but it was not until Friday, May 6, that the last tree was planted; since we planted a forest with the help of the Community, this implies +200 trees in this early stage. And its care so that it has active monitoring until the Forest is fixed and the replacement of the specimens that fail to stabilize. Each species is geolocated and has its identification. 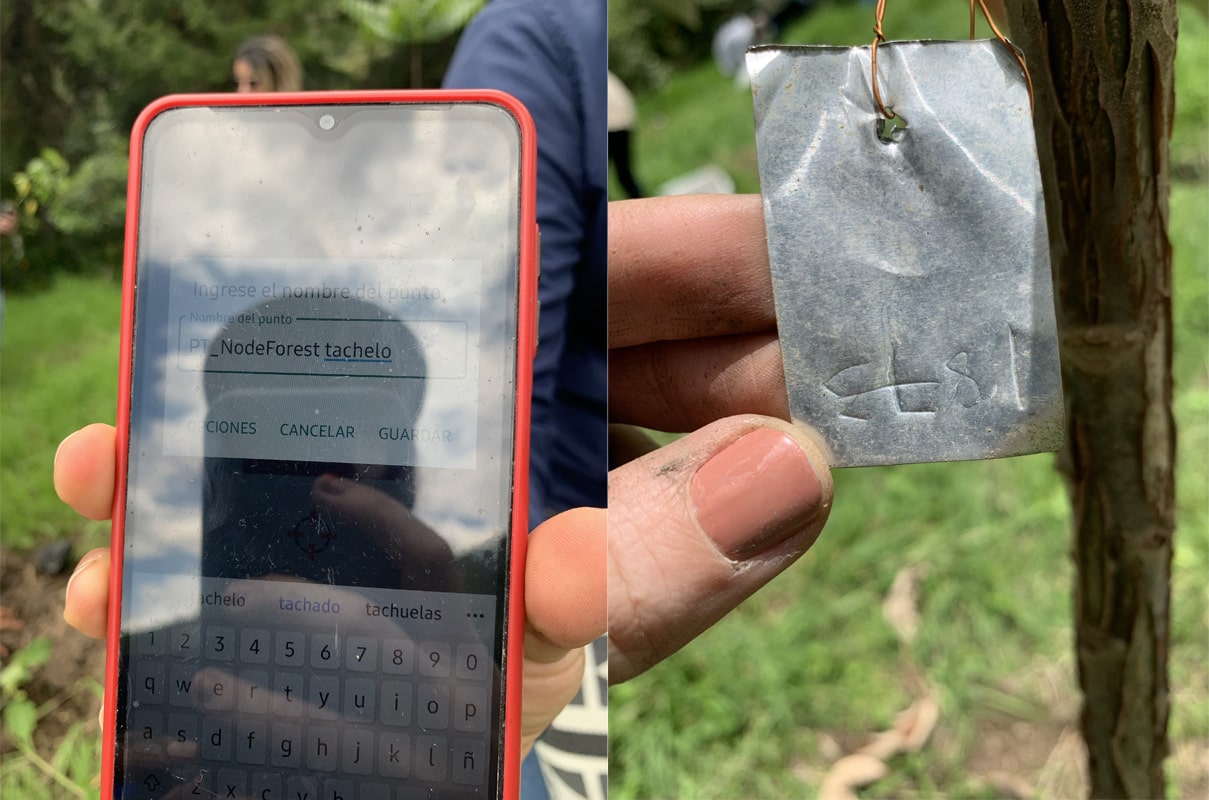 NodeSource is committed to following up and telling you during this first year how this initiative is progressing, which has just begun for us as an opportunity to give back resources to mother earth. 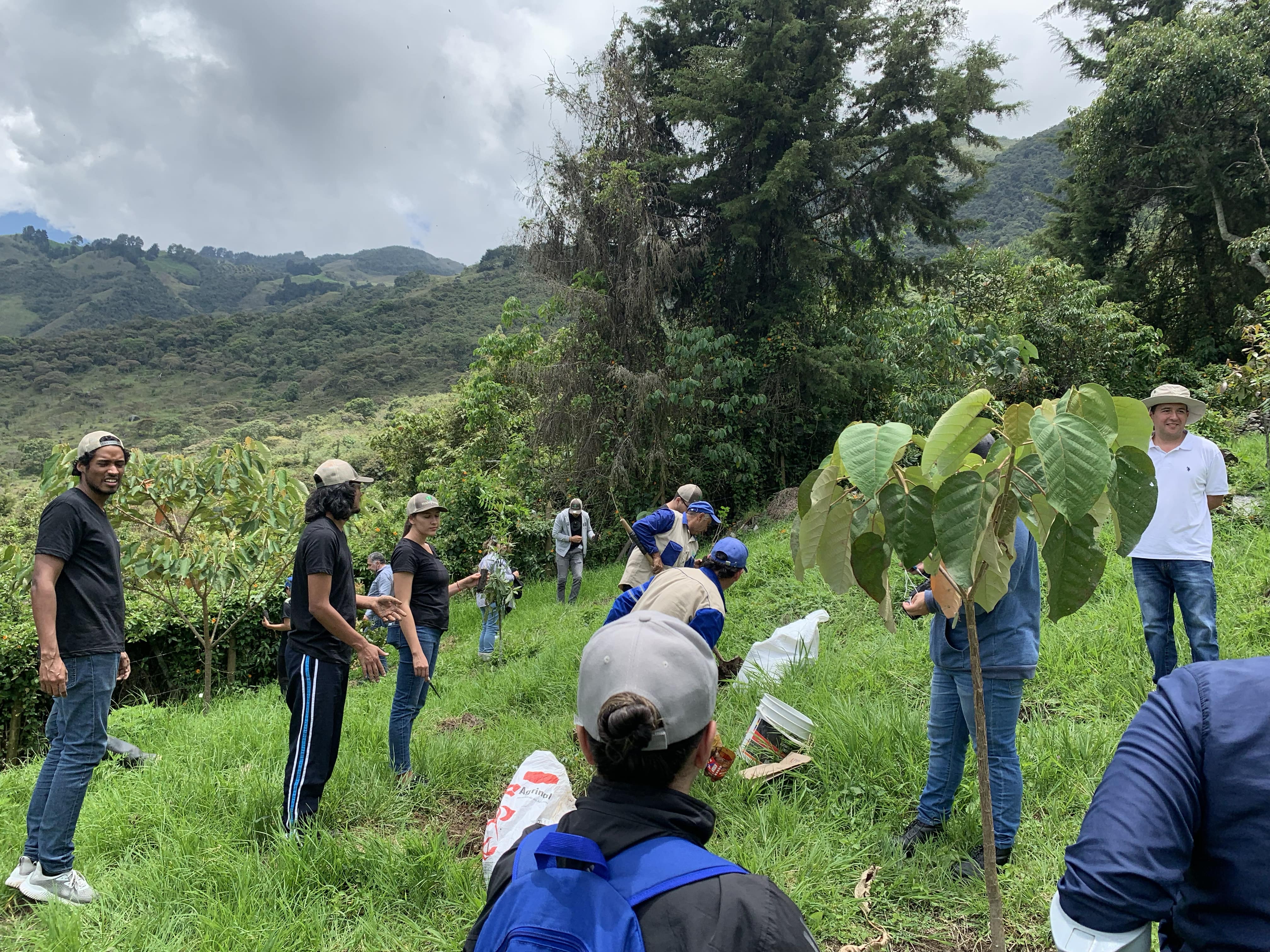 At the end of the plantation, we had the opportunity to see (for the first time for many of us) something magical such as witnessing how water sprouts from the earth, visiting a water source up close, and how a river is formed is an experience that we could not describe or illustrate with a photo or video. We hope that every human being will have the opportunity to paint his heart green and have the unique opportunity to transform his life with contact with nature. 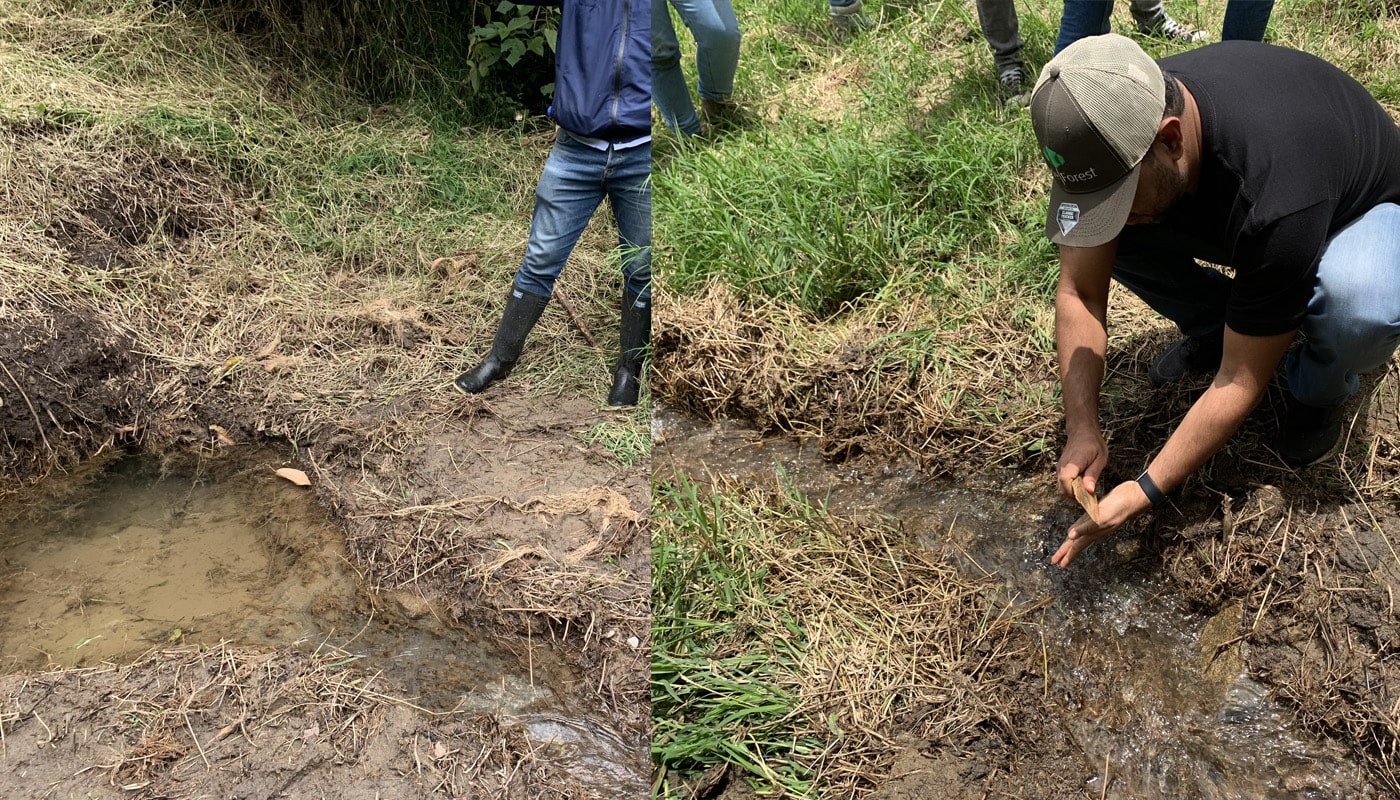 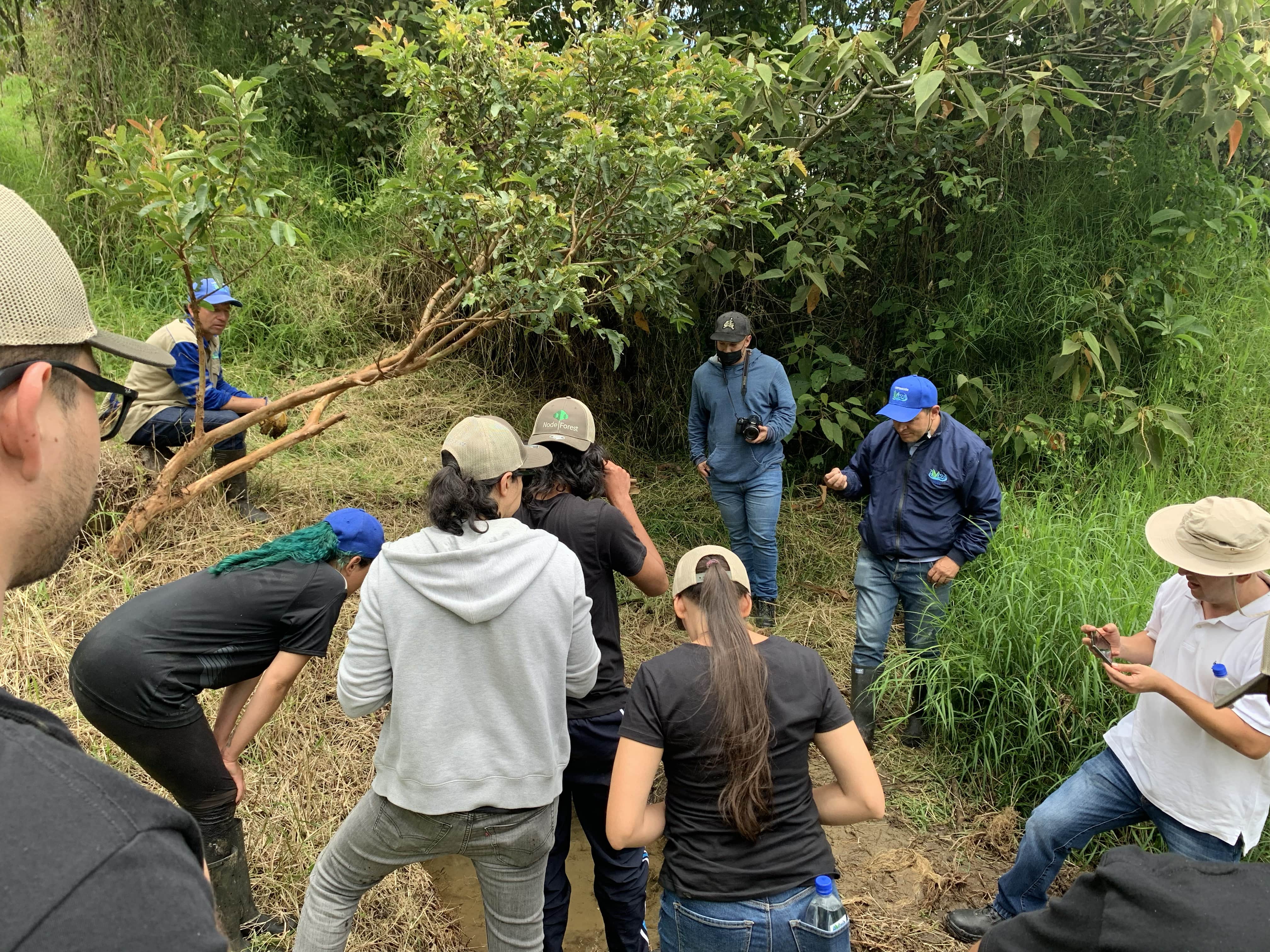 It was fun to see the engineers away from their computers and algorithms, enjoying the fresh air and connecting with the earth. The closing was with typical Colombian food.

You can ask them : which is your favorite dish from colombia?😎🇨🇴

In this picture Adrian, Marian, Juan, Mafe,Gabby, Jesus and Cesar 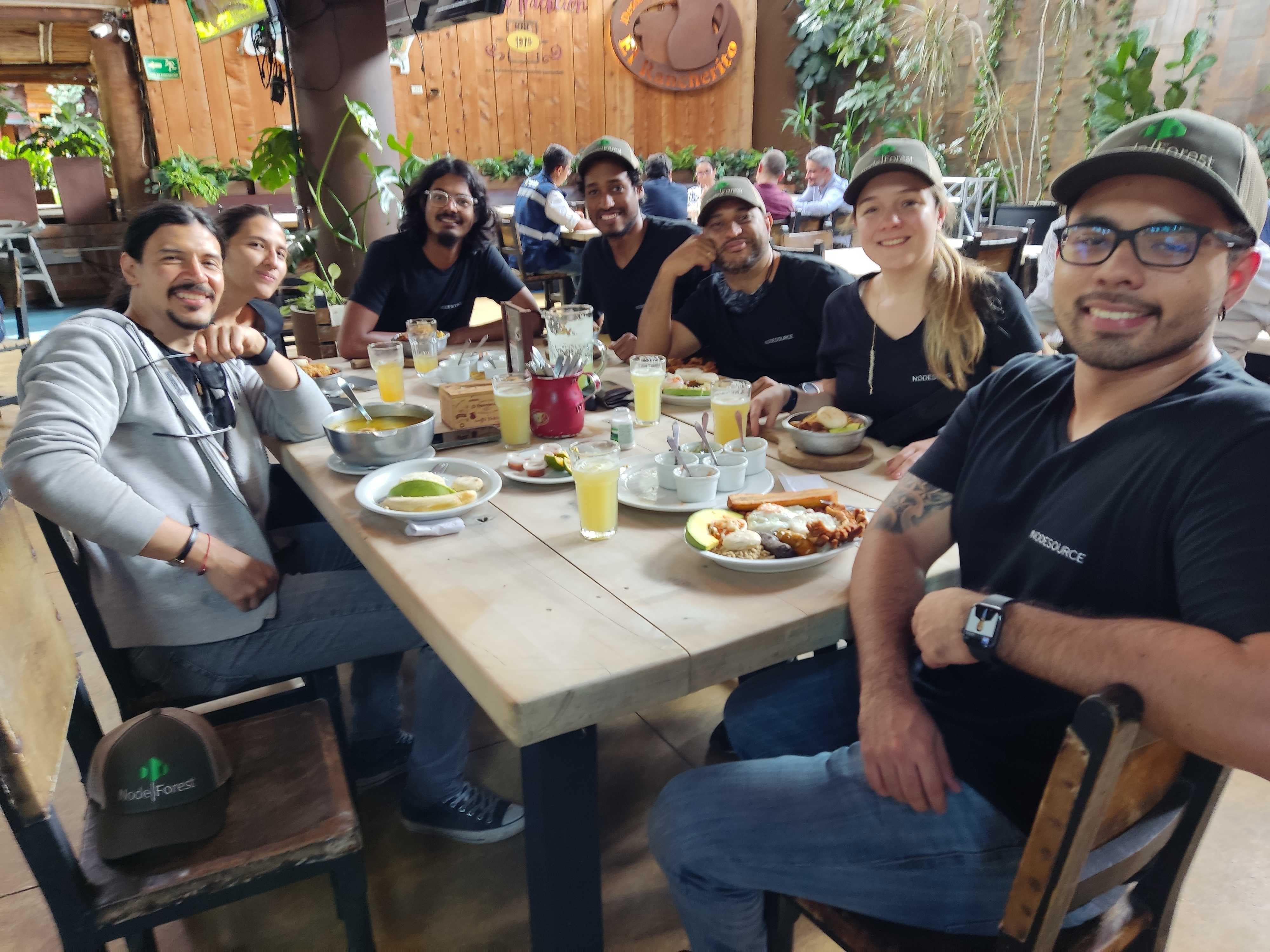 If you felt inspired by this #NodeForest story. We invite you to create an N|Solid account and helping us to create a forest that will further mitigate the environmental impact of using the Internet and its servers. Remember that with N|Solid, you can observe and have control of your processes to produce more efficient software.

Just give us the green light here, and we'll plant a tree in your name. 💚 🌳 #NodeForest by NodeSource