Node.js was first introduced 10 years ago, and in that period of time, has become the fastest-growing open source project on Earth, with +59,000 stars on GitHub and more than a billion downloads.

Part of the reason for the rapid growth in popularity was that Node.js allows developers use the same language for both the client-side and the server-side part of an application: JavaScript.

Node.js is an open-source and cross-platform JavaScript runtime environment designed for building scalable server-side network applications, and it’s a popular tool for almost any kind of project! Because of its exponential growth and popularity, many frameworks were created to enhance productivity, scalability, the speed of applications, to facilitate quick prototyping, and to automate processes with the help of libraries, templates, and reusable components.

In this article, we will explore the differences between three of the most popular frameworks in Node.js: Express, Koa, and Hapi. In a future post, we will look into Next, Nuxt and Nest.

Express is a minimal and flexible Node.js web application framework that provides a robust set of features for web and mobile applications, it behaves like a middleware to help manage servers and routes.

For installing express, you need to have already installed Node.js. If you want to install express in a specific directory and save it in the dependencies list:

However, if you want to install Express temporarily and not add it to the dependencies list, you can use:

This is the most basic example on how to create an express app that listens on port 3000 and responds “Hello World!”:

Although Express.js is a very convenient and easy-to-use framework, it has some minor drawbacks that may influence the development process.

The Express community meets regularly, and they communicate through their mailing list, Gitter, IRC channel, issues in GitHub, and the Express Wiki.

Koa was built by the same team behind Express, and aims to be a smaller, more expressive, and more robust foundation for web applications and APIs. By leveraging async functions, Koa allows you to ditch callbacks and significantly increase error-handling. Koa does not bundle any middleware within its core, and it provides an elegant suite of methods that make writing servers fast and enjoyable.

A Koa application is an object containing an array of middleware functions which are composed and executed in a stack-like manner upon request.

Koa requires node v7.6.0 or higher for ES2015 and async function support. You need to have already installed Node.js.

You can quickly install a supported version of node.js with your favorite version manager:

This is the most basic example of a “Hello World!” app on Koa that listens on the port 3000.

With Koa.js you can build web apps with great performance. This is because you can stop using callbacks, deal with errors faster, and because Koa itself is a very lightweight framework. As well as that, it makes the code management process easier.

It’s important to take into account the best practices for having a better performance in Node.js like running things in parallel, use asynchronous APIs in your code, keeping code small and light, and using gzip compression.

There are different middlewares and headers for Koa that helps to improve the security, you can find them in the following link 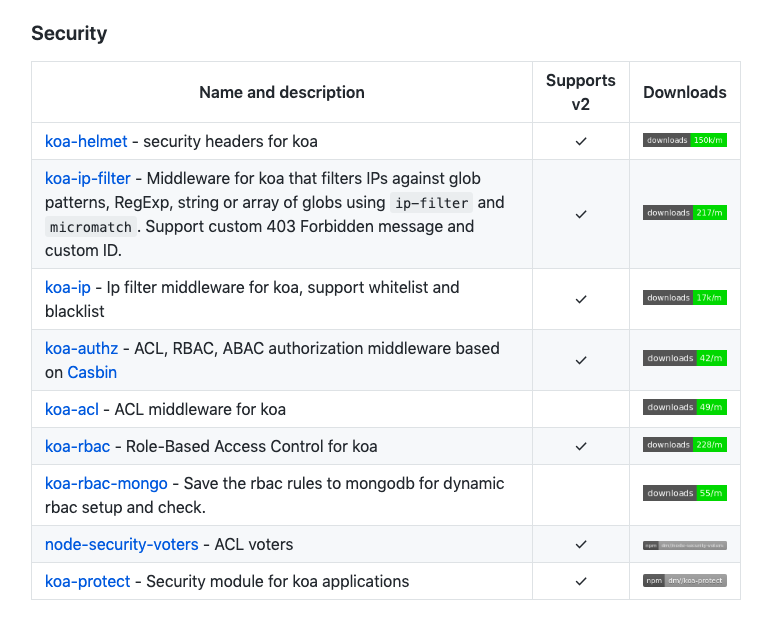 Hapi is a rich framework for building applications and services. It enables developers to focus on writing reusable application logic instead of spending time building infrastructure.

It is a configuration-driven pattern, traditionally modeled to control web server operations. A unique feature Hapi has is the ability to create a server on a specific IP, with features like the onPreHandler, we can do something with a request before it is completed by intercepting it and doing some pre-processing on the request.

To install hapi, you need to have Node.js installed and then:

To save it to your package.json dependencies.

The following example is the most basic hello world app using hapi:

Then you just launch the application by running npm start and open localhost:8000/hello in your browser.

A 2017 study on Node.js frameworks, showed that hapi performed the worst compared to the other frameworks. 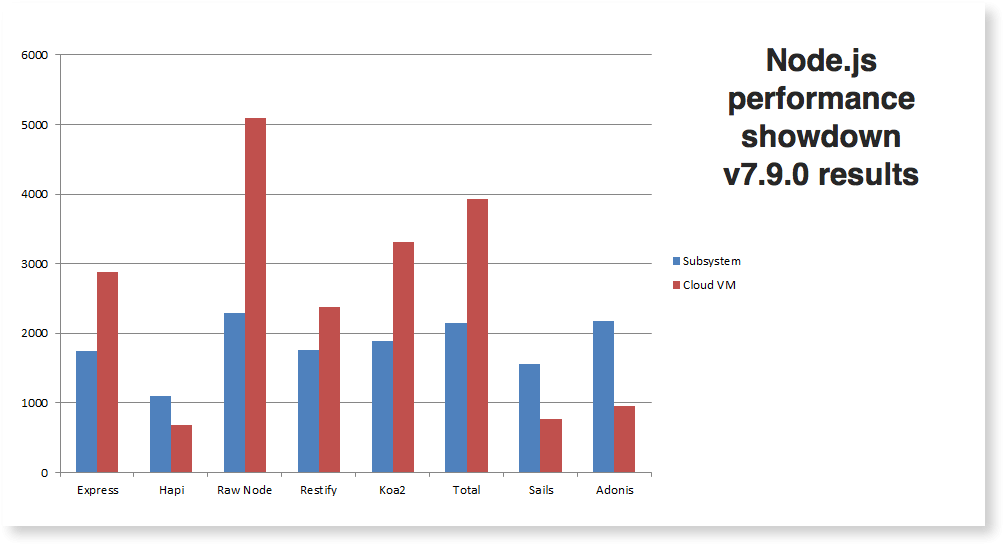 As we can see in the following graph compared to express. This test is consistent with past results. Express continues to maintain a performance edge over hapi. Applications with significant performance requirements should consider the advantage Express has over Hapi. 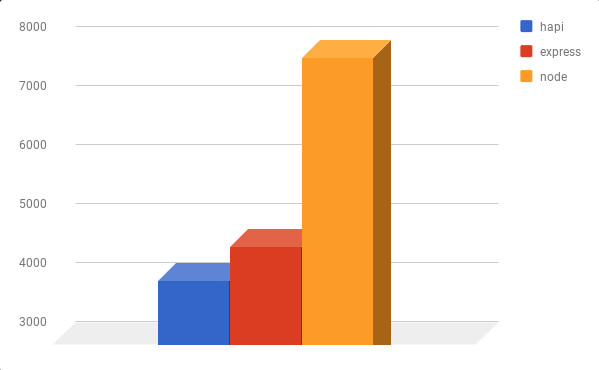 Crumb: Anti cross-site-request-forgery (XCSRF) token generation and validation plugin. It works both with regular requests and CORS requests (OWASP recommends using CSRF protection, such as Crumb, along with CORS). Synopsys recommends using Crumb v3.0.0 or newer since a CSRF token leakage issue has been fixed when using Crumb with CORS enabled and the request origin does not match those specified in the CORS configuration.

Joi: Object schema description language and validator for JavaScript objects. Joi allows developers to define a schema for an object and then evaluate the object against that schema thus performing input validation for the object. Everything is defined and evaluated on the server-side so that the attacker cannot easily bypass this protection.

Blankie: Allows developers to set the Content-Security-Policy header directives easily. The CSP is flexible enough that it may be implemented on a per route basis or across all routes.

Cryptiles: Provides general purpose cryptographic utilities for random number generation, encryption, hashing and fixed-time comparisons of hashes that are based on the Node.js crypto library.

You can join slack channel: hapihour.slack.com, visit the community page, community governance page and follow them on twitter to keep updated with the latest news.